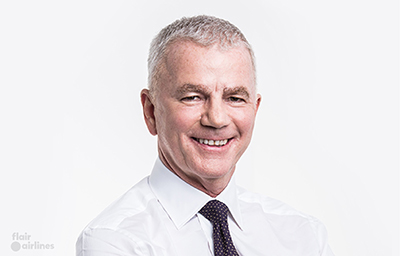 In his new role, Jones will oversee Flair's fleet of Boeing 737-800 aircraft flying to 11 Canadian destinations.

“I am extremely excited to be joining Flair Airlines at this stage of its journey. I firmly believe that Canadian travellers deserve a better deal. It’s time for the Canadian public to benefit from true competition and the choice that passengers in every other region of the world enjoy. Throughout my career, I have seen the meaningful economic and human impact a ULCC can have on a society; I am privileged to join the Flair team in their mission to do the same in Canada," said Jones in a news release.

Prior to joining Flair Airlines, Jones was Managing Director and Deputy Chief Executive Officer of Wizz Air, where he was responsible for operating a 110 aircraft fleet while heading the commercial, marketing, supply chain and digital organizations. Before Wizz Air, Jones served as Air New Zealand’s Chief Strategy Networks and Alliances Officer and was Chairman of the Alliance Management Board for the Star Alliance.

“Mr. Jones' invaluable experience in building and scaling ULCC carriers through a relentless focus on cost will accelerate Flair’s mission to make airfare more egalitarian in Canada," said a spokesperson for the Flair Board.