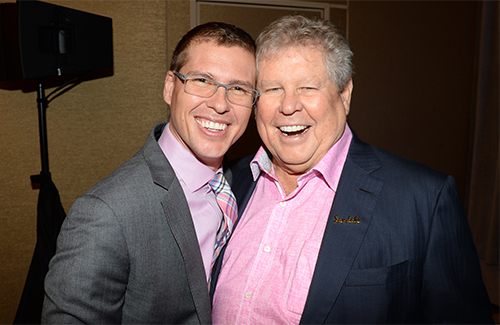 Adam Stewart has been named chairman of Sandals Resorts International following the death of his father, Gordon ‘Butch’ Stewart. The hospitality mogul and founder of Sandals

Resorts International (SRI) died on 05JAN, 2021 in the United States at the age of 79 after a short illness.

Thirty-five-year-old Adam has been an integral part of the Sandals brand since he was appointed chief executive in 2007. He is also president of the Sandals Foundation, the philanthropic arm of SRI which he founded in 2009.

Tributes Continue to Pour In

Fond words and well wishes to the Stewart and Sandals families have continued to pour in after Stewart's passing.

Jamaica minister of tourism, Edmund Bartlett, expressed his deep sadness at the loss of the Jamaican hotelier.

“Gordon 'Butch' Stewart O.J. -- icon of class, philanthropist of the highest order -- was truly an innovator, philanthropist and perhaps the greatest marketer tourism had ever seen," Bartlett said in a tribute posted online.

"Sandals is the largest and most enduring brand created by a Caribbean entrepreneur in tourism and, arguably, the world today sees it as a standard by which all luxury all-inclusives are judged. I hail him as a father, a leader, a benefactor and the greatest tourism entrepreneur of our time. His passing is truly devastating, but his legacy is more enduring and we will draw inspiration from it as we chart these difficult waters of COVID-19 and as tourism struggles with disruptions."

Batt says he first met Stewart more than 30 years ago, and Internova and Sandals' partnership dates back more than a decade. In these years, Batt says "Butch became like family to us. Working closely together, he was always an enormous source of inspiration and positivity."

"When it came to extraordinary accomplishments, Butch had many, but we will always remember his larger-than-life personality, his incredible enthusiasm, his down to earth demeanor, and his exceptional ability to make everyone around him feel loved and special. He was destined to be a great leader in hospitality, and he leaves an incredible legacy in Sandals, for which we are all grateful," Batt continued.

In a statement, the Caribbean Tourism Organization (CTO) said Stewart leaves behind a legacy that will shape future generations.

"To quote his son, Adam, Mr. Stewart was a 'gifted entrepreneur,' a 'marketing genius,' and 'a dreamer who could dream bigger and better than anyone.' There is no greater testament to this than his success as the founder and leader of the world-renowned Sandals and Beaches resort brands, along with the innovations he brought to these brands," said the CTO.

"Mr. Stewart was a mentor to many, and his contributions have touched almost every sector of Jamaican and Caribbean society. His passing is a great loss to the entire region. He was a true travel and tourism and business icon and his legacy will shape future generations."

He Built An Empire, Left A Legacy

The legacy Stewart leaves behind is truly phenomenal, highlighted by the prominent mark he leaves on the all-inclusive resort industry.

Stewart opened the first Sandals Resort in 1981. He took over a rundown hotel on a magnificent beach in Montego Bay, Jamaica. Seven months and $4 million in renovations later, Sandals Montego Bay would open as the brand's flagship property.

Stewart is largely recognized as having re-invented and elevated the all-inclusive resort concept. At the time, "all-inclusive" included meals – usually buffet-style -- and a room in the price. Under Stewart's vision and leadership, Sandals raised the bar, introducing gourmet dining options, premium brand drinks, gratuities, airport transfers, taxes and all land and watersport activities in its all-inclusive concept.

Sandals Resorts also was the first Caribbean hotel company to offer whirlpools and satellite television service, the first with swim-up pool bars and the first to guarantee that every room is fitted with a king-size bed and a hair dryer. In 2017, Stewart introduced the Caribbean’s first over-the-water accommodations, which were quickly expanded to include Over-the-Water bars and Over-the-Water wedding chapels.

In 1997, Stewart expanded his profile by launching the Beaches Resorts brand, now a major industry player in family beach vacations. At the time of his passing, he was hard at work on plans for the recently announced expansions to Curaçao and St. Vincent.

Stewart’s successes have earned him more than 50 accolades and awards, including Jamaica’s highest national distinctions: The Order of Jamaica (O.J.), and Commander of the Order of Distinction (C.D.).

In 2017, Stewart was honoured with the inaugural Lifetime Achievement Award at the annual Caribbean Hotel & Resort Investment Summit (CHRIS), hosted by the Burba Hotel Network.

“The success of Sandals has helped to power the growth of the tourism industry and economies not only in Jamaica but throughout the Caribbean. The word ‘icon’ certainly applies to Butch Stewart,” said BHN president Jim Burba.

A private funeral service will be held. Those wishing to share memories, condolences or personal stories may do so at AllThatsGood@sandals.com.