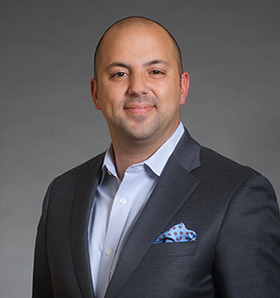 Better than washing dishes: He may be the “new kid on the block,” but Anthony Mormina, recently appointed to the new role of Director of National Accounts at Transat, is enjoying every moment!

Where were you born? In Montreal – Ville LaSalle to be exact.

How long have you been in the business? 12 ½ years. Previously I was at American Express global business travel as head of sales.

How many people work for you? My direct reports are 18 – and growing!

What’s the best part of the job? Hard to say as it has only been a few weeks. But so far so great! I’m learning a lot of the business, and culturally Transat is a great environment to work in. The people are 150% invested in what they do.

What did you want to be as a kid? An air force pilot. CF18s, thanks to Mr. Tom Cruise, if you recall (laughs).

What was your first ever job? As a dishwasher at my mother’s Italian restaurant at Saint Denis and Sherbrooke in Montreal.

What’s the scariest thing you’ve ever done? Being in the operating room when my wife was giving birth by C-section to my daughter. She’s now 6 and my son is 5.

Any guilty pleasures? I have a few...but one of them is food and wine, particularly red wine (I love Zenato).

What’s your favourite airline? I was a flight attendant for Canadian Airlines and if they were still around they’d be my favourite.

What’s on your tablet? My kids have taken over my tablet with educational games.

What do people not know about you? That I also have a bit of a military background. I was an air cadet through high school, then in the reserves for two years. I learned a great amount about discipline, rigor and structure. It was quite the experience.

When were you happiest? The day my daughter was born.

What would you tell your 20-year-old self? “Stay in school las long as possible. And take risks.”

What skill or talent do you admire in someone? Integrity.

What’s at the top of your bucket list? Taking my kids to Italy for the first time.

Ever had a brush with fame? I had the great pleasure to meet Jean Chrétien and Bill Clinton when they were in Montreal at a conference on free trade a couple of years ago and I did a backstage meet-and-greet.

What keeps you awake at night? Wondering if I accomplished everything I had to during the previous day.

How do you spend your frequent flyer points? In the past, on airplane tickets!

What was your greatest extravagance? A day at Walt Disney. The most expensive day of my life: US$1,200. Quite ridiculous.

How do you stay fit when you travel?  I use the hotel’s gym and walk wherever possible.

If you could change one thing about the industry what would it be? Less reliance on technology and more on expertise.

If you could sit next to anyone on a long-haul flight, who would it be? Kenneth Cheneault, former CEO of American Express. Highly respected business leader, entrepreneur, philanthropist.

Do you have a favourite charity? The Montreal Children’s Foundation.

What will be the biggest challenge for the industry in the next 12 months? NDC – new distribution capability, or how airlines are displaying their fare options in the GDS.  Because everyone will have to get on board. There will have to be a massive learning curve.

What do you hope to be doing in 10 years? I don’t necessarily look that far ahead…but if I had to take a stab at it: be at the top of my game career-wise, balanced with giving back to the community, volunteering and spending time with the family.