I have long been a fan of Norwegian Cruise Line – going back to the early 2000's when they instituted Freestyle Cruising. I felt it was a timely change in mainstream cruising then and I absolutely love the way the brand has morphed over these past 15 years to where they are today. 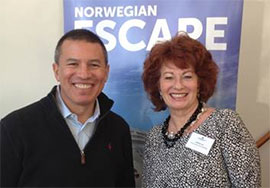 So when I was invited to a small luncheon with guest of honour Andy Stuart who is Executive Vice President of Sales & Passenger Services at Norwegian (and one of my all-time favourite people in our business) I leapt at the chance to catch up on more of the innovations coming from this brand.

Norwegian is doing a lot of things right these days and I am glad to see it because for a while it seemed they had a big dark cloud following them around. They have sorted out their glitches and with their Partners First program they are focused on providing travel agents with the right tools to help sell the brand. And, they are also committed to earning business through the agent channel. 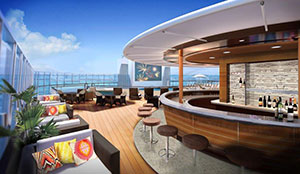 The adults-only SpiceH20 is being enhanced and
expanded on Escape

I really believe this is a cruise line that has come of age and one that travel agents need to embrace more and more. So, as they are about to really kick up their focus on Canada and their commitment to ensuring more Canadians “Cruise Like a Norwegian", it would be wise and financially responsible to pay a lot of attention to what they are doing and go along for the ride.

The big news is the arrival this November of their newest, biggest ship, the Norwegian Escape. On their current road show to key cities in the U.S. and Canada, Andy and his sales colleagues are spending time with thousands of travel sellers to provide more info on the Escape and their plans for future ships as well. 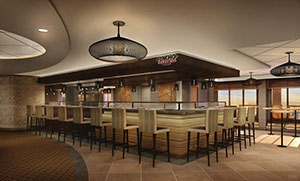 They also want the trade to know how they are morphing their brand, ensuring one of the youngest fleets in the business. By 2019 the expectation is that most of the older, mid-size ships will have left the fleet and the new ones will have arrived. The Escape is 1 of 4 new ships with sister Norwegian Bliss arriving in 2017 and then the remaining 2 in '18 and '19.

As you have read, the cruise line is expanding its sales force to manage the growth and extend their reach. As Andy mentioned to me, in his almost 30 years with the company both in the U.K. and in the States, they have never had such staffing plans or as many sales people on the road helping travel retailers increase their own growth for the brand.

And the good news doesn't end there: one of the best things about the new Norwegian is its truly fabulous ships and the wonderful onboard experience. I sailed on the Norwegian Breakaway 2 years ago when she launched and loved the ship – especially the fantastic Waterfront and all the al fresco dining and drinking venues. I will be sailing on the Escape when she arrives and I basically expect Breakaway on steroids with many of the same great features but taken to another level. What started with Breakaway and Getaway will come to fruition with the Escape class. More deck space for sure and more access to the outside and as Andy says – they are “opening the ships up to the romance of the sea". Who doesn't love that? 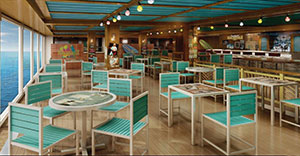 And the dining and entertainment aspect of the ships are where Norwegian is putting a heavy focus and making their bets for the future. What started with the outlier ship Norwegian Epic (now cruising in Europe year round) and continued with both Getaway and Breakaway will be very present on the Escape series. The concepts have worked and are now becoming even more sophisticated. Partnerships have been formed with the likes of Jimmy Buffett, famous chefs such as Jose Garces of Iron Chef/Food Network fame and Mondavi wines. Furthermore, the entertainment is stellar – also a major focus of this Line.

The key is that Norwegian has become a noteworthy and consistent brand and is performing very well in its contemporary mainstream category. It is reliable and is providing guests with a great deal of choice. It has set the stage and found its niche – loads of fantastic entertainment of all kinds, masses of dining choices as well as a fun, relaxed atmosphere on beautiful ships. 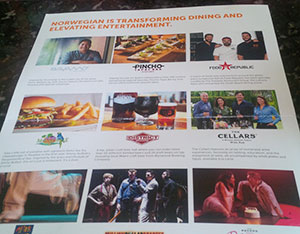 The Escape will take over the Eastern Caribbean itinerary calling at St Thomas, Tortola and Nassau. These itineraries provide 3 days at sea which is perfect for guests to relax and enjoy the ship. After all the ship is the main destination and a worthy one at that.

We send hundreds of thousands of clients to Vegas every year and why? Primarily for the entertainment, the activities and the dining experience. Vegas is still a bunch of hotels in the desert but is a very compelling destination choice. Norwegian is also a very compelling yet alternative destination choice with its new ships and all the bells and whistles therein. And frankly, the entertainment is often as good or better than Vegas as is the dining experience. So let's take another look at this brand and be supportive.