Cuba Cruise: A Unique Way To Explore An Amazing Destination

Not too big. Not too small. Just right.

That was my 1st impression of the Louis Cristal, which, despite 2 decades of writing about the travel industry and countless resort junkets, was just the 3rd cruise ship I’ve ever slept on.

The 1st was a Nile cruiser and the experience of exploring Egypt’s storied history was unforgettable. But with duelling groups of British and German tourists reliving 20th century history, the ship often felt too small.

The 2nd was Oasis of the Seas, and the massive size and technological innovations were astounding. But I’ll walk a mile to avoid a shopping mall, and that’s sometimes what the ship felt like. Already directionally-challenged, I was lost for days.

Stepping aboard the Cristal in Havana’s fortified harbour, I thought of all who had sailed here before, from plundering pirates to naval and merchant ships from around the world. I pondered the changes in store for the beautiful island and the proud, dignified Cuban people who have made it my favourite destination. Just days ahead of our trip, the U.S. and Cuba had announced a thawing of relations, and there was a buzz in the air. 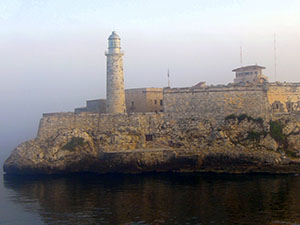 Mostly, I thought about how excited I was to experience Cuba through the eyes of my 2 teenage sons, who were making their 1st visit to the island. I knew they would love La Habana Vieja – especially the younger one, who already recognized specific buildings. Apparently he had blown them up in a video game.

Our family of 4 flew down aboard TS, on a new flight program designed to coincide with the 2nd year of Cuba Cruise circumnavigations of the island, along with a stop in Montego Bay. The early afternoon arrival time left plenty of hours to explore the Old City – or even take in the Tropicana show – before the Cristal set sail after midnight. 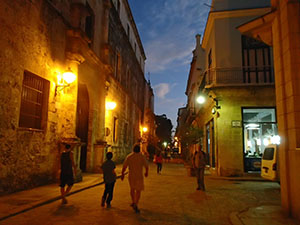 We checked in with little fuss and soon met our cabin steward Safick, a lovely man from Mauritius who made us feel right at home. With a deluxe outside cabin for mom and dad and a premium inside cabin across the hall for the boys, we were soon unpacked and ready to explore – Havana 1st, then the ship.

The Old City just gets better and better, and after a good walk there and a bargain-priced meal of seafood (and Cuba Libres for dad), at Restaurante Dos Hermanos, we were excited to get a closer look at our floating home for the next week.

Cristal is an older ship, so you won’t find a surf simulator or ice skating rink. I’m good with that.

The 25,000 ton ship can carry 1,200 pax and 400 crew, but was only at about ½ capacity for its 1st sailing of the season – making for a comfortable atmosphere on the ship chartered for a 2nd season by Canadian company Cuba Cruise.

The ship has had a hugely colourful history – originally built as a passenger ferry in 1980, she was converted to a cruise vessel in 1986. Cristal was destroyed by fire in 1990, then completely rebuilt. She partially sank in 1994 and was rebuilt again. She has been renamed 5 times and belonged to 5 different cruise lines, including Norwegian, where she was the MS Leeward. 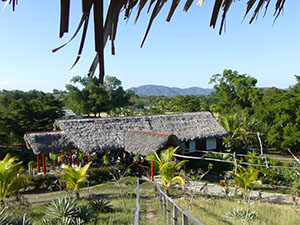 The beauty of rural Holguin

Our cabins were near the stern, so I woke the 1st morning and walked just a few feet to the outdoor deck. Two decks below was an outdoor bar, hot tub and seating area that became our favourite onboard location.

Our 1st day was at sea, as Cristal traversed Cuba’s north coast. We admired the view, tested the buffet for breakfast and lunch – plenty of variety and quality – and swam in the ocean-water pool. For our 1st dinner aboard we had a very special meal at the Alberta Prime Steakhouse that began with a massive table-served antipasto platter and featured delicious Canadian grilled meats. Service was impeccable. 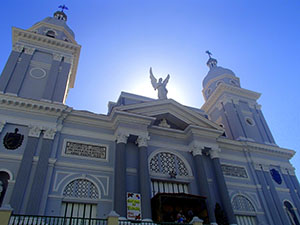 The crew was nationality-diverse, warm and natural in their dealings with guests. Passengers were varied too – Canadians made up the largest group, but there were Swedes, Finns, Norwegians, Germans and even Australians. There were a few Americans too – including the large red-faced man in a U.S. Navy t-shirt who could usually be found at reception yelling about some perceived failing of the ship or staff. (Be careful what you wish for Cuba!)

The shore excursions are a true highlight of the Cuba Cruise experience. The 1st stop was in Antilla, a small port in Holguin, where we spent a day driving through beautiful rural countryside, visiting Fidel Castro’s hometown, enjoying lunch and a horseback ride or river swim and visiting a local farm, where we sampled everything from star fruit to sugar cane moonshine.

We celebrated Christmas Day in Santiago de Cuba, the country’s 2nd largest and most Caribbean city. We visited the amazing citadel of San Pedro de la Roca, a UNESCO World Heritage Site, and handed out bags of Christmas candy to kids in the main square. That brought squeals of delight and hugs and kisses from kids and parents alike. 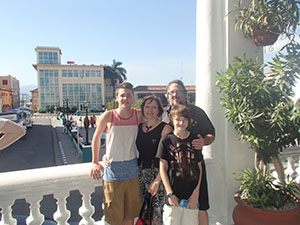 The next 2 days saw our oldest son quarantined with influenza A, so mom and the younger boy set off to enjoy a beach day in Negril during the Mo’Bay stop and a nature tour in Cienfuegos. Dad stayed aboard to relax and take care of a disappointed young cruiser. When he was released from quarantine we were all able to enjoy some beach time and snorkelling at the remote beach at Punta Frances on the Isle of Youth.

The next day brought us full circle to Havana. We all agreed we’d happily stay on and do it all over again if we could. There was great news at the airport, however, as TS had been forced to switch to an A330 because of a large group on the way down. Flight attendants greeted us with the unusual advice to “pick a row, any row – there’s one for everyone.”

For cruisers seeking the modern mega-ship amenities, Cuba Cruise might not be the ticket. But for anyone looking for a value-priced, destination-focused experience with a friendly crew and quality entertainment and cuisine, Cuba Cruise and the Louis Cristal have lots to offer. With potentially rapid change on the horizon, now is the perfect time to recommend this unique way of seeing Cuba.