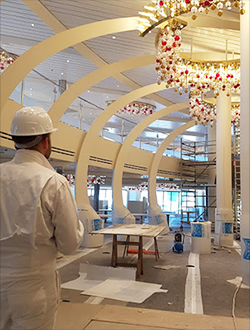 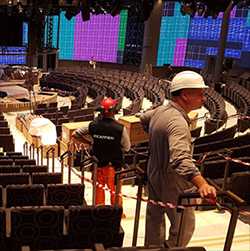 360 degree seating will be available at the World Stage Theater, home to 3 shows a night.

There is something thrilling about seeing a vast cruise ship up close, but when it is in the midst of being completed with a combo of love and labour – now that’s something.

So what a thrill it was to visit the soon-to-sail HAL Nieuw Statendam. Last week I joined a media group from the States and Europe as we learned more about this beauty, the company’s second Pinnacle Class ship currently getting the final touches for its December 2018 debut. And she’s going to be a beauty.

“We’ve had as many as 4,000 workers on the ship at one time,” Stan Kuppens, the ship’s Hotel Manager told us as we donned Ghost-buster white overalls, steel-toed boots and hard hats prior to our visit. “These ships take between two and three years to build and we are now at 85% completion.”

The ship is currently a beehive of activity, and we toured to the accompaniment of the whirr of sanders and snarl of drills – and smells that varied from fresh lumber to new carpet. Kind of like new-car-smell times a million.

The numbers are impressive: up to 2,666 guests (including 12 in outside cabins designed for solo travellers) and 1,000 crew. 32 family staterooms accommodating up to 5 guests per. 13 guest decks. 12 restaurants/cafes, 7 bars and 7 entertainment centres. 139 whiskeys in one tasting bar. A US$4.1 million art collection.

I found the partnership angle interesting:  Holland America has entered into a number of branding partnerships with companies as diverse as Rolling Stone Magazine, America’s Test Kitchen, Lincoln Center and the New York Times.  And that itty bitty brand called Oprah Winfrey.

The mega-star will christen the Nieuw Statendam in Ft. Lauderdale, and will also escort a Girls’ Getaway 3-day cruise. That sailing sold out within 24 hours. The ship will then start a career sailing, for the most part, in the Caribbean and Northern  Europe.

Like its sister ship the Koningsdam (and future sibling, due in 3 years) the Nieuw Statendam is sure to please the upper premium client who appreciates the good things in life.

Next up:  Keep an eye out for our exclusive interview with Nieuw Statendam Captain Sybe de Boer in Biting Questions.