Arnold Donald On Changing The Perception Of Holland America 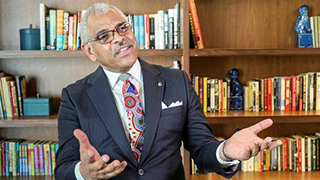 During a recent interview with Carnival Corp. CEO Arnold Donald, Cruise Week asked: "There have been so many changes for Holland America Line in the five years since you became CEO -- arguably more so than for any other Carnival Corp. brand. What do you see as the biggest change?"

He didn't hesitate: "The biggest change was getting into the head of the travel agent community and media, because the perception of Holland America that was bandied about was not Holland America."

Donald elaborated on the misperception: "People imagined it to be really old people with walkers and wheelchairs. That was never Holland America Line. So we had to battle this ingrained misperception."

Carnival Corp. did so by engaging with onlookers in a different way. "Every brand makes changes, but by highlighting a few features, by making some small evolutionary changes, it just created the opportunity for people to take another look at Holland America and really see what it is," he said.

In this vein, there have been a host of changes, as rattled off by Donald, from Music Walk on a number of ships to BBC Planet Earth in concert, all of which have made the experience better.

And not the least noteworthy is the partnership with O, The Oprah Magazine. "Having Oprah Winfrey as the godmother of the Nieuw Statendam and having The Girls' Getaway cruise with Oprah sailing with us -- those are big things to a lot of guests," he noted. And Oprah is certainly not an old fogie.

He then cited numerous changes on the dining side: "Our council of seven world-renowned chefs advising the culinary program has taken the culinary experience to an even higher level."