OJ ON LOCATION: Symphony Of The Seas Christened In MIA 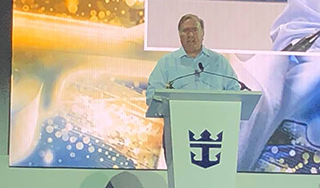 Richard Fain speaking at the inauguration of Royal Caribbean’s 25th ship in the fleet. 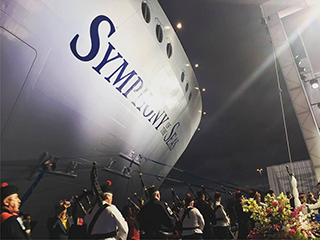 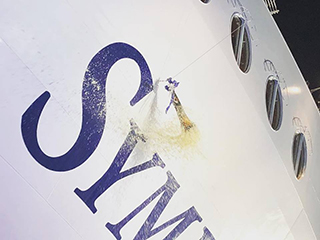 Open Jaw was on hand as Symphony of the Seas was christened in a colourful ceremony last night in Miami.

It was a one-year-old, who, with a little assistance from his parents, pushed a button, prompting the release of a massive Champagne bottle that soared over the audience on a zipline before smashing into the ship's hull. The child was Ocean PenaVega, son of actors and mega cruise fans Alexa and Carlos PenaVega. They are the ‘godfamily’ for the ship, marking another first in the ship christening space.

Confetti poured from the sky as rain began to fall, after holding out until the very end of the ceremony, making for what Royal Caribbean CEO Richard Fain called a "perfect night."

The dock-side christening ceremony at PortMiami also included a parade of bagpipers and an on-stage performance by the cast of the ship's adaptation of "Hairspray," the musical. The event was followed up by fireworks that lit up the city’s waterfront.

The Oasis-class Symphony of the Seas launched in APR 2018 as the world's biggest cruise ship. The 5,518-passenger (6,680 total) ship spent its inaugural season sailing in Europe before making its way to Miami, where it will offer year-round Bahamas and Caribbean cruises.

Open Jaw is filming aboard the ship, so stay tuned for more coverage and an inside look at another cruise industry mechanical marvel.