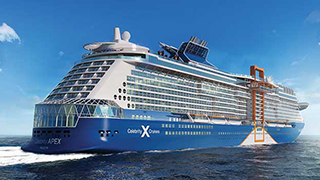 Celebrity Cruises says its 2020 Europe season will be the brand’s most “revolutionary” yet, marking the inaugural season of Celebrity Apex, the newest addition to Celebrity’s fleet and the second ship in the innovative Edge Series.

The Celebrity Apex will make her debut in APR 2020 from Southampton, England. Like her sister ship, the newly launched Celebrity Edge, Celebrity Apex will feature an innovative outward-facing design and accommodations that invite guests to take in the breathtaking world around them.

In total, Celebrity’s 2020 European season will feature six ships, two of which will have been reimagined as part of the ‘Celebrity Revolution,’ an ambitious US$500-million-dollar revitalization program. The fleet will visit the most cities ever by Celebrity in a single season – with more than 90 ports of call across 27 different countries.

New destination experiences will include a first-ever mini-season of sailings from Lisbon, Portugal, as well as country-immersive sailings in either Greece or Italy. This season also introduces new ports for Celebrity, including Trieste, Italy and Isle of Portland, Dorset, UK. Back by popular demand, the brand is also returning to Oslo, Norway; Agadir, Morocco and Kusadasi, Turkey, where guests can explore the ancient city of Ephesus.

As the newest ship in the Edge Series, Celebrity Apex will feature impeccable accommodations, including Edge Staterooms with Infinite Verandas and two-story Edge Villas with outdoor plunge pools, as well as 29 culinary venues. Celebrity Apex will debut in Southampton where she will offer a mini-season of five sailings to European destinations, including the Norwegian Fjords and the northern coasts of Spain and Portugal. Travellers can also experience a new 10-night Capital Cities Cruise with visits to iconic cities including Amsterdam, Copenhagen, Oslo and Paris.

After Celebrity Apex’s Northern Europe mini season, she’ll spend the rest of her inaugural summer sailing seven- to 12-night itineraries. During her peak season, Celebrity Apex will venture through the sparkling western Mediterranean from Barcelona and Rome.

Celebrity Edge will join her sister ship, Celebrity Apex, in the Mediterranean and offer a full season of sailings in the eastern region and Adriatic. On 10- and 11-night itineraries, the Edge will take travellers to Trieste, Italy – a unique crossroads of Latin, Slavic, and Germanic cultures – where they will overnight and spend two days, providing the opportunity to explore Trieste and Venice in one stop. Celebrity Edge will also transport travelers to some of the most breathtaking places in the world, including the Amalfi Coast, Malta, and the picturesque, sun-soaked islands of Greece.

Aboard the “revolutionized” Celebrity Constellation, travellers will have the opportunity to try new country-immersive sailings. These nine- or 10-night itineraries feature stops almost exclusively in one country – Italy or Greece. Travellers will experience bucket-list Italian destinations, including Venice; Sicily; Naples; Portofino; Florence and Rome. In Greece, they will discover the myths, legends and natural beauty of the Greek Isles, with visits to Katakolon; Mykonos; Crete; Santorini; Corfu and Athens.

In addition, Celebrity Constellation will offer sailings in the Adriatic Sea with stops in Dubrovnik, Croatia; Kotor, Montenegro; Koper, Slovenia; and Split, Croatia.

Celebrity Infinity returns to the Mediterranean with an exciting mini-season of sailings from Lisbon. These first-time sailings visit ports on the Iberian Peninsula on the way to Barcelona, including Valencia, Malaga, and La Coruna, Spain, and Porto, Portugal. Morocco has also been added to Celebrity Infinity’s transatlantic crossing itinerary, a port Celebrity Cruises hasn’t visited since 2016.