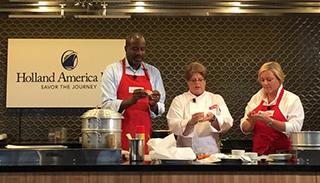 The new themes include:

“Holland America Line guests are knowledge seekers, foodies and learners, and our America’s Test Kitchen shows really resonate with them — which is why they’re wildly popular and draw standing-room-only crowds,” said Orlando Ashford, Holland America Line’s president. “We’re excited to expand on the already exceptional menu of shows offered by America’s Test Kitchen to include some fun topics that easily transition to the home kitchen.”

All Holland America Line ships (except Maasdam) feature an onboard venue replicating that of the popular television show, America’s Test Kitchen. The five new cooking shows join a collection of 14 other cooking demonstrations.

In addition to the shows, Holland America Line guests have 24-hour access to episodes of “America’s Test Kitchen” and “Cook’s Country” television programs in their staterooms.