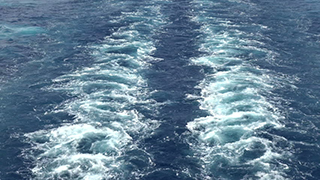 Over the past three days, Cruise Week asked a wide range of cruise sellers, ranging from front-line travel advisors to national top producers, "Is Wave Season off to a strong start?"

"No," bluntly replied one national seller. "Wave Season has been tepid so far, with many cruise lines sharpening offers, particularly in Alaska and Europe. Flagging stock market is not helping, but economic fundamentals are good, so I expect the ship to right itself."

But several agents emphasized that the booked position was strong heading into Wave and continues to be so. "Wave has been solid for us (not spectacular, but good for sure)," said one top source. "It's all about how long Wave lasts. We all need 6+ more weeks to be in really great shape."

In the meantime, cruise sellers reported a mix of optimism and some concerns, both of a specific and general nature.

An example of a specific concern: "We have seen some tactical [pricing], even on Edge. Maybe Celebrity was a little quick to think they could maintain the per diems they got initially. Their launch was as good as it gets, but that premium might be unsustainable."

On the more general side: "Caribbean and Alaska continue to be strong, although lines were proactive with Alaska, promoting more strongly in the fall, especially for those Seattle turns."

A widespread view is that Med continues strong into Wave, though it didn't jump in the past few weeks: "Europe is one of our strongest destinations, for both cruise and land, once again," said one top seller.

But even with Europe, several retailers are expressing concerns. "Rates in Europe and Alaska are what we would like to see," summed up Gary Pollard, Ambassador Tours, San Francisco, CA.

Weather: An Icy Greeting to Wave

Where the weather is coldest you sometimes find the best indicators for Wave Season for the Caribbean. Most of Canada was warmer than usual for the first ten days of 2019, but that changed considerably starting this past weekend as temps dropped in Montreal and elsewhere.

"Cruise sales in Canada are performing well, and we are very happy with what we are seeing with our USA locations, especially with the contemporary cruise lines," reported Matthew Eichhorst, president, Expedia CruiseShipCenters and global cruise leader of Expedia Group.

"I'd say Wave is mixed," said another top producer. "But our expectations for Wave may be too high considering what we've been seeing over the past few years."

He explained that the true beginning of Wave Season has backed up from January to December then November in recent years: "Now it begins in September or October. What happens is the cruise lines have done a phenomenal job of pushing up the booking window and base loading. You just naturally get less [of a volume increase] in January when you already have a lot more on the books."