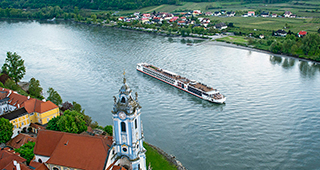 River cruises are one of the hottest trends in the cruise industry, according to an industry outlook report from CLIA.

Nearly four out of five travel agents (79%) find river cruising is a great way to introduce new-to-cruise travellers to the cruise experience.

“Travel agents most frequently and overwhelmingly say their clients’ interest in river cruises comes from a desire to experience something new or different,” the reports says. “Trailing this substantially are requests for smaller ships, destination immersion, relaxed entrée to Europe, less unpacking, more destinations and reduced seasickness. Other motivations for river cruisers include educational experiences, slower pace, intimate settings, luxury and trendiness.”

As a result, Europe, with its many navigable rivers, is seeing a surge in popularity. River cruises in Europe have seen 53% year-over-year growth to eastern waterways (Rhine, Moselle, Danube, Elbe), 30% growth to western channels (Soane, Seine, Loire) and 24% growth to the south (Douro, Rhone, Dordogne, Garonne, Po).

The report also found that: