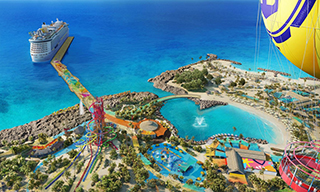 A rendering of the updated Coco Cay.

Compared to the same time last year, Royal Caribbean is the only publicly traded cruise company enjoying accelerating same-ship yields, according to analyst Hedgeye. In particular, the transformation of Coco Cay is seen as a positive factor moving ahead.

"Coco Cay is doing phenomenally well," said Felix Wang of Hedgeye during his presentation. "The Coco Cay ships are having a much bigger price appreciation than the non-Coco Cay ships for the RCI [Royal Caribbean International] brand."

That said, Royal Caribbean ships calling in Coco Cay are doing so well, that their success is spilling over to the non-Coco Cay ships.

"It's another reason why RCL is attracting a premium in the Caribbean," said Wang. "The island revitalization is a strategy Royal is experimenting with and it seems to be already paying dividends."

The first and biggest part of the island is opening to Royal Caribbean brand ships in May 2019. Four Oasis-class ships and the Royal Amplified ships will be calling.

He cited 80% premiums for Celebrity Edge: "That's 80%, not 8%. That is enormous….This one ship is generating about 20% of revenues for all of Celebrity Cruises. Edge will account for almost all of Celebrity's yield improvement in 2019."

Spectrum of the Seas is the new ship RCI is rotating into the China market in the second quarter of this year.

"It's early to assess pricing because the Chinese book very close in," said Wang. "But our read is that Spectrum pricing is phenomenally strong for a market that has been having issues for the past few years."

Spectrum's China pricing, he continued, is also strong versus other new ships, including Costa Venezia, the new Costa ship specifically designed for the Chinese market. "Royal has a very high brand image for China," explained Wang.

Expect these premiums to last awhile. "When some other companies have new-ship pricing premiums, they don't last as long as Royal's in the contemporary category," noted Wang.