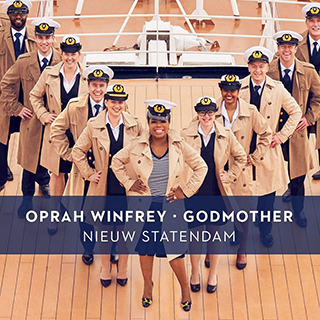 The christening by Godmother Oprah Winfrey of Holland America Line's newest ship in Ft. Lauderdale opened with Carnival Corp. CEO Arnold Donald pointing out that the just-completed Oprah cruise on Nieuw Statendam was like no other.

"We just completed three days of Oprah's Girlfriends Cruise," said Donald in his introductory remarks. "And as one of the 57 men -- but who's counting -- that was on a cruise of more than 2,000 women. It was indeed an honour and a privilege to be included. And it was a lot of fun. In fact, the pajama party last night -- it might just become a mainstay across the fleet."

A Journey To Remember

For her part, Oprah said that the cruise was an experience she’ll always remember.

After mentioning the number of memorable experiences she's had over her lifetime, "the past three days will certainly be ones that I will cherish and they will live with me forever," said Winfrey. "I've never seen anything like the experience of these past few days."

She gushed about the diversity represented on every level. "There's diversity in age," she said as one example. "The youngest person on board was six, the oldest person was 93. There were 30-year-olds and 50-year-olds mingling and dancing on the dance floor with 60-year-olds and 70-year-olds -- and a 93-year-old who I gave two tequila shots to last night."

She then pointed to differences onboard with economic status, skin colours, range of life experiences and where people came from -- all over the country and indeed all over the world.

"What was so remarkable about it is that everybody gathered, made friends, was friendly with and connected to people whom they didn't know, but left with people's phone numbers and information because they felt like they've met themselves on some level," she said.

"I've never seen anything like it," she repeated as if astonished at the experience. "I think that's what you do best," she said to Orlando Ashford, the President of Holland America Line. "It represents hope. It also represents the celebration of self."

Affinity Cruising At Its Best

She thanked O, The Oprah Magazine Publisher Jayne Jamison for suggesting the Oprah's Girlfriend's Cruise: "She is always presenting ideas to me. And because I reached the stage in my life I only do exactly what I want to do, a lot of those ideas I say ‘no’ to."

She initially rejected the idea, but Jamison "explained how it would be exactly what it has become -- a grand celebration of what we represent and try to do, bringing hope and insight and self-empowerment and self-improvement into women's lives," said Winfrey. "And creating this gathering space for everybody to come together of one mind and celebrate themselves and honor themselves."

It turned out, said Winfrey, to be one of the best things she has ever done.

Winfrey also related that she brought nine family members on the cruise. "My cousin Alice who has been taking care of me since I was a little girl is in her 70s now," said Winfrey. "She has never been on a cruise like this before. And she's got all this luggage and she has all these things. Alice is usually carrying a bag of almonds and Emergen-C to hand out to everybody."

Winfrey continued that her cousin asked a "young man" to help her with her bags, who turned out to be HAL President Ashford. "So the young man, Orlando, helps my cousin Alice with her luggage and literally gets into the elevator with her and tries to help get her to her room. Orlando doesn't know my family from anyone else."

When done, Alice tried to tip him a dollar.

So he has to tell he's the president.

"That is my favourite story," said Winfrey. "You have a president who helps people in the elevator with their luggage. I love that."

It wasn't just the president who was praised for fine service.

"I also love the fact that when I was onboard Holland America Line before [in Alaska], we had the most beautiful butler," she recalled. "If you want a lemon, there he is. 'I think I want avocado toast.' There it is. 'I'm thinking of a cappuccino.' It arrives."

An expert at connecting with her audience, Winfrey noted her butler was in the crowd listening to her speak, and enthusiastically proclaimed him to be "The best!"

"Lots of people get served, but you know someone in their spirit and their soul and they do it with such love," she said. "Maya [Angelou] says your legacy is every life you’ve touched. I am now part of your legacy. You are part of my life."

As she is a part of Nieuw Statendam.