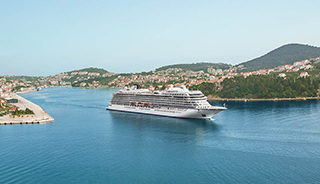 It seems like yesterday when river cruise giant Viking launched its first ocean ship. This week it took delivery of Viking Jupiter®, the sixth in its maritime fleet.

The handover ceremony took place at Fincantieri’s shipyard in Ancona, Italy. On 16FEB, Viking Jupiter will be the first in the fleet to sail the Journey to Antiquities itinerary, a new route between Athens and Rome offering guests the chance to experience the Mediterranean during the quiet season.

During its maiden season, Viking Jupiter will sail throughout the Mediterranean and then Scandinavia. The ship will officially be named in Oslo, Norway on 6JUN by her ceremonial godmother, Sissel Kyrkjebø, the acclaimed Norwegian soprano.

“It is always a proud moment when we are able to welcome a new ship to our fleet,” said Torstein Hagen, Chairman of Viking. “Viking Jupiter is our sixth ocean vessel in just four years– a clear sign of the positive response to our approach to ocean cruising.

We are different because we focus on the destination, and that resonates with our guests. We are pleased that with continued growth we have the opportunity to introduce even more travelers to the Viking way of exploration.”

Viking’s ocean ships have a gross tonnage of 47,800 tons, with 465 staterooms that can host 930 guests. Viking Jupiter is the latest in a fleet of sister ships, which also includes Viking Star, Viking Sea, Viking Sky, Viking Sun and Viking Orion.

Ten additional ships are also planned for delivery starting in 2021, which could bring Viking’s ocean fleet to 16 ships by 2027.

On Viking’s ships, fares include an outside stateroom, a complimentary shore excursion in each port of call, all onboard meals, and all port charges and government taxes. Guests also enjoy beer and wine with lunch and dinner service; alternative restaurant dining; free Wi-Fi; self-service laundry; access to the Thermal Suite in the LivNordic Spa; and 24-hour room service.