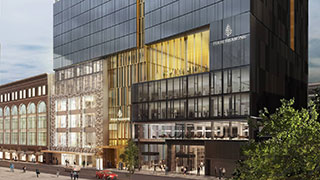 The new Four Seasons Hotel in downtown Montreal is now confirming reservations for arrivals beginning 1JUN 2019, just in time for some of the city’s most popular summer events and festivals like the Grand Prix, the International Jazz Festival and Just for Laughs.

For shoppers, Four Seasons has direct access to the adjacent Holt Renfrew Ogilvy from its third floor lobby.

MARCUS, by internationally renowned chef and restaurateur Marcus Samuelsson, is the on-site restaurant at Four Seasons, flowing in and around the hotel's reception and lobby in a series of indoor and outdoor spaces.

The hotel also offers a spa and fitness centre, a skylit indoor pool and a fifth floor ballroom with outdoor terrace, catering to wedding and event functions.