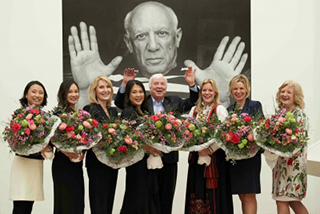 A bevy of Viking godmothers.

Of the seven ships, six are Viking Longships – Viking Einar, Viking Sigrun, Viking Sigyn, Viking Tir, Viking Ullur and Viking Vali – which will be deployed on Viking’s most popular itineraries on the Rhine, Main and Danube Rivers. The seventh new ship – Viking Helgrim– was inspired by the Longships design and built specifically for the Douro River, bringing the company’s total number of sister ships in Portugal to four.

Last month the company took delivery of its sixth ocean ship, Viking Jupiter, which will be named in Oslo on 6JUN.

At the naming ceremony, Chairman Hagen, recognized the 7 godmothers of the new ships: “This year I am especially proud to honour members of the Viking family as godmothers of our newest river ships.”