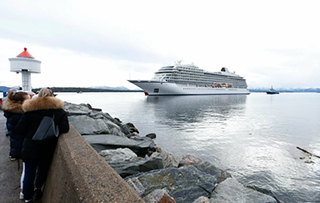 Viking Sky arrives in port after a harrowing weekend.

After a weekend of drama, Viking Sky has reached port with its remaining passengers.

While stranded due to engine problems in wild weather off Norway’s western coast, Viking Sky had more than half its 900 passengers airlifted by helicopter to safety before authorities opted yesterday to allow the ship to limp into the nearby port of Molde with the aid of a tugboat.

"All passengers and crew are safe, and passengers will be flying home starting tonight," the cruise line said in a statement. "Throughout all of this, our first priority was for the safety and well-being of our passengers and our crew. We would like to thank the Norwegian Redningssentral and the Norwegian emergency services for their support and skill displayed in managing the situation in very challenging weather conditions."

The cruise line's next sailing, which had been set for Wednesday, has been cancelled.

Carolyn Savikas of Pennsylvania described the terror to Norway's VG newspaper, saying she heard a "terrible crash" and the ship rocked. Water raced in.

"We were in the restaurant when a really huge wave came and shattered a door and flooded the entire restaurant," she said. "All I saw were bones, arms, water and tables. It was like the Titanic– just like the pictures you have seen from the Titanic."

Viking Ocean Cruises said 20 people were injured, although some had been treated and released.

Some of the 479 passengers who were flown to shore were scheduled to begin flying home Sunday, the company said. Another 436 passengers and the crew of 458 remained aboard while the ship headed toward port.

Passengers aboard the ship praised the efforts of ship officers and crew to maintain calm and make the best of a difficult situation.