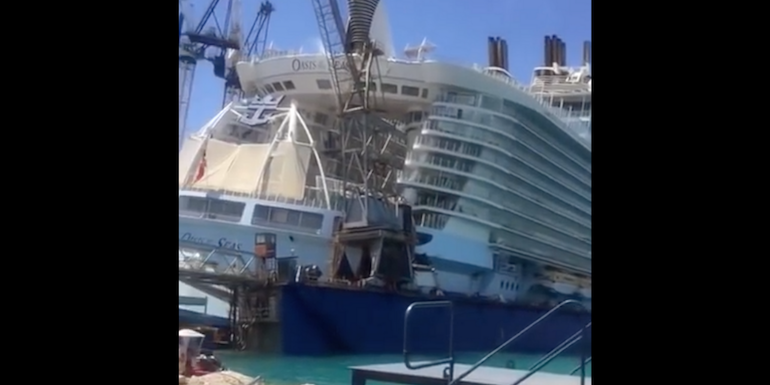 In last week's issue, Cruise Week reported on a crisis at sea -- the  Viking Sky adrift off the Norwegian coast. It seemed a one-off situation very internal to the business.

Then another Viking problem -- less serious but notable in its timing, occurred just this week, as reported in our most recent special edition, with the Viking Idun colliding with an oil tanker near Antwerp.

On the same day that occurred, a crane fell on Oasis of the Seas during a drydock at the Grand Bahama Shipyard causing visible damage to the ship. Oasis was not in service when the accident occurred so none of the eight injured people were passengers.

Details are scant on damage to the ship, but Royal Caribbean has now announced that the 7-, 14- and 21-APR departures have been cancelled. Guests on the three sailings will receive full refunds as well as full credit toward a future cruise.

Oasis will now head from the Grand Bahama shipyard to be serviced at facilities in Cadiz, Spain.

This phenomenon of multiple problems internal to the industry happening in quick succession could perhaps change near-term consumer perceptions of cruising with ensuing consumer media coverage.

The industry is divided on the near-term impact. Even when speaking to two leaders of one large agency group we heard divergent views.

The first said there's going to be a dip: "Every time that there's anything out there about a brand, it struggles. The question is for how long?"

But the second said, "Given the busy news cycle the industry got a bit luckier than normal. I think this will go away quickly and for those that are anti-cruise it will just reinforce their feelings that they don't want to cruise. Loyal cruisers will keep on cruising."