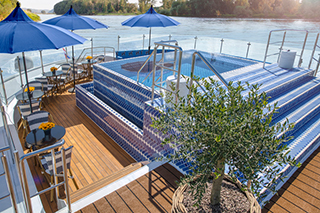 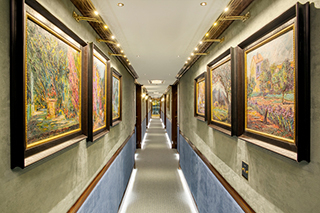 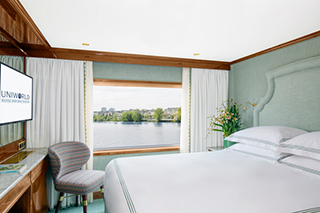 Following an ambitious makeover that not only reimagined its purpose, overall design and aesthetic but enhanced its structure, Uniworld Boutique River Cruise Collection has debuted its newest Super Ship today, the S.S. Bon Voyage.

After an eight-month renovation in the small shipbuilding village of Druten, The Netherlands, the S.S. Bon Voyage has now returned to France to set sail on her ‘maiden’ voyage.

According to Uniworld CEO and President Ellen Bettridge, the ship was specifically designed to immerse guests in French culture, art, wine and cuisine. “Like the finest couture, the S.S. Bon Voyage was built with a singular purpose, to share the marvels of this amazing destination with our guests and there isn’t another like it in the world. It is certainly more expensive to build [ships] exclusively for a particular destination, but we know our guests value authentic experience above all else,” says Bettridge.

In addition to common areas, every guest room and suite has received a redesign with cool marble bathrooms and unique features.

Wellness on the Water integrates the ship and the diversity of the Aquitaine landscape to strive for a healthy lifestyle, which the French refer to as douceur de vivre, a sweetness for life. Activities include yoga in the heart of an iconic historical site, such as the Blaye fortress with 360° views over the Gironde estuary, guided trekking or Nordic walk with a naturalist from the Garonne river banks, through the Bastide of Cadillac or sunrise meditation on Europe’s highest sand dune,La Teste-de-Buch.

“The S.S. Bon Voyage’sdebut not only represents a new marvel on the river, but the continued, industry-leading transformation of the entire Uniworld fleet,” said Bettridge. “Her arrival sets the scene for the anticipation of planned Super Ship launches in 2020 and beyond.”

The S.S. Bon Voyagesails on three itineraries through France: the eight-day Brilliant Bordeaux, 15-day A Portrait of France, and 22-day Ultimate France.