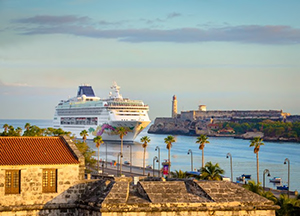 There's confusion over new rules on Americans cruising to Cuba.

The Trump administration announced new measures against Cuba this past week aimed at weakening the Communist regime. For the cruise business, the yet-to-be-defined sanctions are viewed as having potentially negative ramifications for cruise calls to Cuba.

When announcing sanctions at a speech in Miami aimed at reversing what he called "Disastrous Obama-era policy," U.S. National Security Advisor John Bolton said, "The Department of the Treasury will implement further regulatory changes to restrict non-family travel to Cuba.

"These new measures will help steer American dollars away from the Cuban regime or its military and security services who control the tourism industry in Cuba."

His words raise the possibility that as early as May, travel to Cuba will be restricted to family visits for U.S. citizens, i.e., no cruise vacations.

But so far there’s no clarity on new, tougher regulations. And cruise lines, on the record, are not giving up on Cuba cruises.

To try to get more specifics, Cruise Week wrote NCL, the capacity leader to Cuba, "What do you recommend agents say to customers who are concerned about future cruises to Cuba?"

NCL didn't specifically answer the question, but instead supplied a general statement regarding all NCLH brands: "We are closely monitoring recent developments with respect to U.S.-Cuba travel.  At this time no new regulations have been issued, and, accordingly, the company's itineraries which include Cuba as a destination will continue as scheduled."

The arrival of Joy followed a non-revenue 9,336-nautical-mile repositioning voyage from Shanghai. Along the way were stops in Singapore, Taiwan and Japan as the ship was retrofitted for American tastes.

The seeds of that journey also began with political rancor -- in this case between the U.S. and China.

Recall that it was back in October 2015 that NCLH Chairman/CEO Frank Del Rio announced the Norwegian Joy would be designed specifically for the growing China market. That was a time when China was being hailed as the new frontier for cruising.

But after the Presidential election in 2016, tough trade talk became the norm for U.S./China relations and in early 2017 China's government announced no more cruise calls to South Korea in retaliation for certain U.S. actions.

Cruise execs initially played down the effects of limited destinations. However, later on in earnings calls some conceded the itinerary restrictions had disrupted business.

Today, the China cruise market continues, but no industry leader is forecasting it to be the world's largest cruise market in the near future, as was once the case. But NCL is doing what the cruise industry has always done when met with a setback: bounce back.

With Joy, NCL is bringing a new style of cruising to Alaska, and in a bigger way than initially planned, which may play out in their favour.

For the cruise industry, which invested billions in the Chinese market, that country is far more important than Cuba. However, for North American travel agents in general, Cuba is more lucrative; the island has already blossomed into a commission generator, freshening up Caribbean itineraries.

That's one reason that the current tensions with Havana are unnerving. At press time we've seen and heard differing viewpoints from industry sources, all said with complete certainty.

One well-placed source said this will not just disrupt cruises for U.S. citizens to Cuba near term, but for an entire generation. Another, just as well-informed, told Cruise Week, "No worries, all indications are cruise lines will be exempt."

So it's a case of wait and see until the Dept. of Treasury chooses to share details on Cuba policy. In the meantime, agents and their clients who have booked Cuba cruises that depart after 1MAY may be on edge.