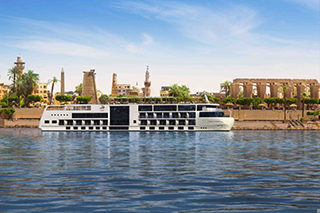 Viking has announced an expansion of its Egypt program for the 2020 season, which will include the launch of a new ship. Inspired by the design of the award-winning Viking Longships and built specifically for the Nile River, Viking Osiris is currently under construction and will double the company’s owned capacity in Egypt when it debuts in September 2020.

Also launching in the next year are two new Pre-Cruise Extensions designed to enhance guests’ base knowledge of Egyptology prior to arriving in Cairo. These five-day extensions to Viking’s Pharaohs & Pyramids itinerary will provide guests with privileged access to archives and exhibits in London and Oxford that are not normally accessible to the public.

This announcement comes as Viking guests continue to express strong interest in Egypt – and just one year after the company launched Viking Ra, a completely renovated vessel and the line’s first owned and operated ship on the Nile.

“Egypt has inspired explorers for generations, and it remains a top destination for many of our guests,” said Torstein Hagen, Chairman of Viking. “For more than two decades, we have led the river cruise industry with our fleet development and experiences that bring travellers closer to the cultures of the world. We remain committed to Egypt, and we look forward to introducing the historic treasures of the region to even more Viking guests.”

Hosting 82 guests in 41 staterooms, Viking Osiris will feature the clean, elegant Scandinavian design for which Viking is known. The line is the first and only Western company to build, own and operate ships on the Nile.

During the 12-day Pharaohs & Pyramids itinerary, guests experience Egypt’s cultural treasures in seven destinations. The cruisetour begins with a three-night stay at a first-class hotel in Cairo, where guests can visit iconic sites such as the Great Pyramids of Giza, the necropolis of Sakkara and the Mosque of Muhammad Ali.

Guests will then fly to Luxor, where they will visit the Temples of Luxor and Karnak before boarding a Viking river ship for an eight-day roundtrip cruise on the Nile River, featuring privileged access to the tomb of Nefertari in the Valley of the Queens, and excursions to the Temple of Khnum in Esna, the Dendera Temple complex in Qena, the temples at Abu Simbel and the High Dam in Aswan, and a visit to a colorful Nubian village, where guests can experience a traditional elementary school. The journey concludes with a flight back to Cairo for a final night in the ancient city.

Viking’s river offering in Egpyt includes an outside stateroom, a complimentary shore excursion in each port of call, all onboard meals, and all port charges and government taxes. Guests also enjoy complimentary amenities including beer and wine with lunch and dinner service; Wi-Fi; and cultural performances.