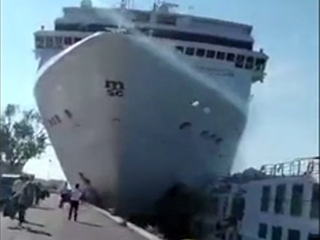 The MSC Opera came to rest along the dockside after hitting Uniworld's River Countess. 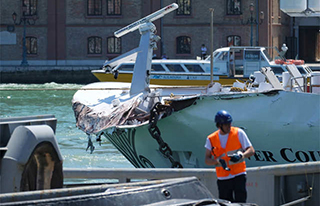 The long-running debate over the impact of large cruise ships in Venice gained fuel yesterday when the 13-deck, 2,700-pax MSC Opera lost control while docking, scraped along the dockside and plowed into Uniworld’s River Countess river boat.

A video of the crash – which happened at 8:30 am on Sunday morning after MSC Opera experienced an engine failure – shows the tower ship heading for the dock, horn blaring, as people on shore flee for safety. The ship then scrapes along the dockside before hitting the Uniworld vessel.

According to a Uniworld statement, four guests sustained minor injuries on board, with one hospitalized. The 130-pax River Countess was on a turnaround, and most passengers had already left the ship to head home. There were no reported injuries on the MSC ship.

The collision took place on the Giudecca Canal, a major thoroughfare leading to Saint Mark’s Square. In an immediate response, Venice Mayor Luigi Brugnaro said it was “no longer conceivable” that cruise ships could pass through the busy Giudecca canal and called for a new route to open immediately. Italy’s Transport Minister Danilo Toninelli concurred, saying the incident “proves that cruise ships shouldn’t be allowed to pass down the Giudecca anymore.”

“MSC Opera experienced a technical issue while manoeuvring towards Venice’s cruise terminal for mooring. Albeit the ship was accompanied by two tug boats, as required by the local safety procedures, and even though the captain immediately applied all required procedures, the ship grazed the dock at San Basilio,” said MSC Cruises in a statement.

Reports say River Countess suffered a small leak at the waterline while the Opera's hull was scratched, however the safety of neither vessel was compromised.

“Uniworld’s technical and nautical crisis response team are now in Venice to thoroughly evaluate the River Countess and take necessary action,” said a statement from the line. A decision on the status of future voyages will be made soon.