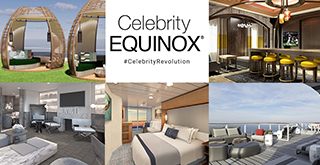 The newly modernized Celebrity Equinox has embarked on her first sailing since undergoing the "Celebrity Revolution" treatment.

The permanent resident of the Caribbean is the third Celebrity vessel to be "revolutionized" as part of Celebrity Cruises' $500 million investment in ship-wide upgrades, which aims to raise the brand's fleet to the standards of its latest vessel, the Celebrity Edge.

"Celebrity Equinox holds a very special place in the hearts of everyone at Celebrity Cruises, and also for our guests; this one-of-a-kind ship continues to be the most awarded in our entire fleet," said Lisa Lutoff-Perlo, President and CEO, Celebrity Cruises.

Celebrity Equinox's bow-to-stern modernization began on 4MAY, 2019, in Cadiz, Spain. The ship spent 29 days there in the hands of more than 500 engineers, architects, designers and other skilled workers.

Enhancements and additions aboard the ship include:

Celebrity Silhouette is next up for the upgrade, scheduled for completion on 31JAN, 2020, with five more ships to be modernized by 2023.