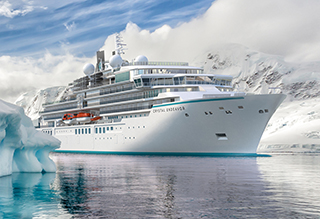 Crystal's 28th annual sales gala, honouring 56 travel partners from 14 countries who sold at least $1 million in Crystal cruises in 2018, wrapped up Sunday night aboard Crystal Serenity in Europe. Cruise Week contributor John Roberts reports on the news from and reaction to the event.


Crystal President and CEO Tom Wolber opened the six-day gala thanking travel partners for their "unwavering commitment to Crystal."It was somewhat the same message as at last year's gala, but far more confident this year as steadiness settles in.Wolber has led Crystal Cruises since late 2017, and he spent a large part of his first 18 months on the job steadying operations. "We have really worked on goals of stabilization of the company," Wolber said. "We are getting to where we need to be."Others have taken notice. Eric Maryanov, president of L.A.-based All-Travel and board chairman for Signature Travel Network, says he's observed a big change from a year ago."Last year at the gala Tom promised stability, and he delivered on it," Maryanov said. "There was such a huge transformation. The foundation that's been rebuilt and the infrastructure has really been redone at Crystal, which really sets the stage for the next step."It's not just about the pretty decor. Now that behind the scenes [back-office] is so much more stabilized, that's what's going to propel it forward."Crystal's VP of Revenue Management Rolando Trejos delivered numbers that show revenue is up across all Crystal experiences (ocean, river, yacht) -- with double-digit increases in each segment year over year as of 1MAY. Ocean is up 10%, river up 12.2%, and yacht (Crystal Esprit) up 31.4%.He noted booking revenue has already met or exceeded total 2018 revenue across all experiences, and there is only about 12% inventory remaining for 2019.Regarding the biggest upcoming event, Wolber was tight lipped about Crystal's Diamond Class of ocean ships, explaining that the line is in the "process of perfecting the design plans" and that he doesn't want to promise specifics, then not deliver on them."Believe me, they are going to be the talk of the industry," he said of the ships.Wolber also outlined itinerary details for Crystal Endeavor, the line's purpose-built expedition ship, which is due to launch August 2020.Endeavor's 2021 Northeast Passage sailing is in "high demand" and waitlisted, according to Wolber. The ship will also sail two Antarctic voyages via New Zealand and Tasmania and the Ross Sea, as well as cruise to Russia's Kamchatka Peninsula, the islands of Japan, and Alaska.That's a lot of breadth for five separate itineraries.Looking ahead, Crystal says overnight stays and extended port visits will be a priority for 2022 itineraries, which may address some concerns."The biggest criticism from my consistent Crystal clients has been itineraries," Maryanov explained. "But we're seeing them addressing those changes and coming up with new and different itineraries."To underscore changes at the line, Crystal has launched a new marketing campaign and tagline it says more accurately fits its vision: "Crystal: Where Luxury is Personal."Marc Kazlauskas, president of the leisure division of U.S branch operations for Frosch Travel, says Crystal has been living up to its new motto: "Years ago, it was more of a black-tie feel, more of the food, more of the onboard experience. The luxury now is more of that laid-back, individualized, personalized luxury."What's not laid back are tech changes. VP of Information Technology John Polimenakos reported that Internet speeds have doubled across the Crystal fleet for 2018. Bandwidth will double again by 2020, meaning that Wi-Fi speeds will be eight times faster than in 2017.Walter Littlejohn, VP and managing director for Crystal River Cruises, says he was not overly excited to lose the double-wide Danube ship Crystal Mozart, which is heading to parent company Genting to be part of a new cruise venture catering to the Chinese market.But he emphasized the move makes the fleet uniform, with four identical 106-passenger all-balcony ships.Littlejohn said the company's new Vienna Dock is in a "soft launch" phase. It's exclusive to Crystal River Cruises and is located adjacent to the Danube Hilton in Vienna.Summing it up, Kazlauskas of Frosch, like many Cruise Weekspoke to, said he has seen the improvement over the past year: "Frankly, they've done more than stabilize. I think they've stepped up their game with the new Endeavor."I think they've done an incredible job on river with consistencies. And with the new Diamond-class ship coming, we're just waiting with bated breath."