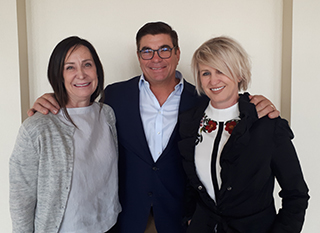 It hasn’t sailed yet, but Virgin Voyages sure knows how to make waves.

That’s not surprising considering that the charismatic Sir Richard Branson is the face of the franchise, and he’s an absolute master of attracting attention.

But this week it was a Canadian woman in the media spotlight, when Virgin Voyages announced that the first master of its first ship – The Scarlet Lady– would be veteran Canadian seafarer Wendy Williams.

Cruise ship bridges remain a male-dominated space, so the announcement of Williams’ appointment resulted in a media frenzy, including a major piece on CNN.

When Open Jaw met with Williams and senior Virgin Voyages executives the next day, CEO Tom McAlpin wondered aloud if the head of the first Canadian woman to captain a major cruise ship would be able to fit through the door. “She’s like a rock star,” he teased.

Friendly and unassuming in person, Williams’ response was quintessentially Canadian. “Don’t worry. If it gets too big I’ll just go back to my little farm (near Nanaimo on Vancouver Island) to remember what’s real.”

With a lifelong love of the sea, Williams knows what’s real. Born in the coastal Quebec city of Sept-Îles, she spent a decade as a deckhand on fishing boats off Canada’s west coast. It’s a tough job that doesn’t encourage arrogance. Since then, Williams has worked as a ferryboat captain and spent 15 years as a senior officer on large cruise ships.

In an interview with Open Jaw, McAlpin acknowledged that Virgin Voyages is all about doing things differently and disrupting norms. But he says that’s not a goal in itself.

“This is not about only trying to be different. We want to be the world’s most irresistible travel brand. We want to appeal to veteran cruisers and to those who’ve never cruised before. There are a lot of people who trust Virgin to do something right, not just something different.”

Earlier, at the opening general session of Travel MarketPlace East, an annual event hosted by Travel Market Report in partnership with ACTA, McAlpin addressed the line’s dedication to the trade in a Q&A session with TMP’s Anne Marie Moebes.

“We had the benefit of starting from scratch, we listened to our travel agents, and we call them our first mates because they’re the right hand to the Captain, so they’re really an important part of our strategy.”

McAlpin said the main feedback they heard from agents was that they weren’t getting paid commission on everything they sell with non-commissionable fees.

Virgin decided to eliminate that “pain point” in favour of a structure that pays 10% commission on everything an advisor sells, from shore excursions to onboard experiences to insurance. Strong sellers will earn more with bonus commissions paid at the end of the year based on volume.

Stacy Shaw, VP of Sales and Business Development for Virgin Voyages, says the line is targeting a mindset rather than a specific age group.

“We try not to put people in buckets. We’re looking for people who want a different experience, whether they’re younger or young at heart. We want to offer them great food and immersive entertainment – not Broadway shows, but immersive experiences and lots of happy surprises.”

McAlpin says agents have responded very positively to the Virgin Voyages approach of offering a “more inclusive proposition at a healthy price.”

As he puts it: “We want to offer great value and we don’t want our Sailors (guests) to feel nickeled and dimed. And for travel agents we want to eliminate pain points and pay them for everything they sell for us. We had a blank sheet of paper and we want to be different. This is how we’re doing it.”