Cruise Sector Is Not Immune To Sensationalized Media Coverage 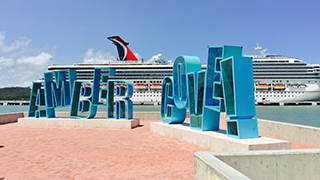 Media coverage of the tourist deaths in the Dominican Republic hotels has really taken off, and despite the stories having nothing to do with cruises, Cruise Week says there may be implications for the cruise industry.

Mainstream media is often looking for a controversial story, something that's going to sell papers or, in today's word, attract clicks.

There's nothing particularly new about that take, but it certainly brings home what would happen if a few people were to "mysteriously" die on cruise ships.

Cruise Week points to an incident that happened several years ago when a few people went overboard in separate incidents, and consumer media sensationalized the events.

That situation pales in comparison with today's coverage of D.R.

In order to quantify that coverage, Cruise Week conducted research using a media monitoring service on the incidence of Dominican Republic stories.

It found that there were 27,000 "mentions" of D.R. deaths in the first three weeks of JUN, and that was before the latest barrage this weekend.

"We haven't seen anything equivalent in the entire tourism industry for the past year. This number of 'mentions' translates to millions of readers and viewers," writes Cruise Week.

By comparison, the biggest negative stories for the cruise industry in the first half of the year involved Viking ocean – when poor weather prompted a high-stakes evacuation of the Viking Sky off the coast of Norway on 23MAR -- and Viking river cruises –where Viking Sigyn ran over a sightseeing boat on the Danube on 29MAY.

The multiple problems associated with Viking combined turned up more than 25,000 mentions for the entire year – whereas the 27,000 D.R. mentions occurred over the space of a few weeks.

Journalist Gene Sloan, who recently left USA Today after covering the cruise beat for decades, notes of the D.R. situation: "The bigger picture here is that the mainstream media has really ramped up its coverage of the most sensational travel stories over the past year or two, and the cruise industry is not immune. It's what's working now."

Cruise Week concludes that although the first half of the year has been relatively benign for the cruise industry as a whole (save for some big, negative media coverage for specific incidents), based on how big media has evolved in an era of splintered platforms and publishers of content, media coverage of the cruise industry may become more and more sensationalized.