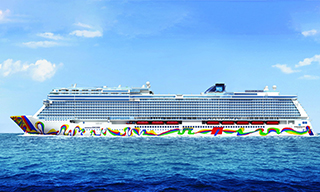 At the Scarpetta Restaurant in Miami Beach, Norwegian Cruise Line recently showed off new features which will be aboard Norwegian Encore, due to arrive in November. Of primary importance was previewing selections to be featured at Onda By Scarpetta, a restaurant on the new ship.

"Onda" means wave in Italian; "Scarpetta" means to savour a meal to the last bite. On the menu were a variety of hors d’oeuvres and pasta dishes. The Yellowtail Crudo (raw yellowtail sashimi-style) and Tagliatelle with Lobster and Tomato Sauce were highlights.

Cruise Week reports that if the food onboard is as good as what was served at the event, it’s going to be hit. Pricing for the onboard restaurant wasn’t discussed.

Also introduced live at the event was a new show which will be on Norwegian Encore: “The Choir of Man.” The nine talented performers from the UK (who had apparently been together for only a week) sang various songs that displayed the substance of their upcoming show on board. It’s high energy music, dancing, and live percussion, all to be performed in a pub-like setting on the main stage.

In an example of the exceptional value that guests get onboard ships these days, the touring company of the show will be in Fort Lauderdale at a local playhouse with prices ranging up to $97 pp. Onboard the ship there’s no charge.

Richard Ambrose, NCL’s VP of Entertainment, explained some of the thinking to Cruise Week: "The Broadway titles are what our guests are looking for and we’ll continue to offer, but we also look to push the envelope and surprise them with new experiences."

Ambrose says what attracted him to The Choir of Man was the unique set up of this production:

"Nine regular guys in a pub, singing popular and current music. These guys are true professionals, but most important they are down-to-earth, regular guys who can sing. It’s really about their personalities and what they can bring to the show."