Propulsion Problems On Vista Cause Carnival A Costly Headache 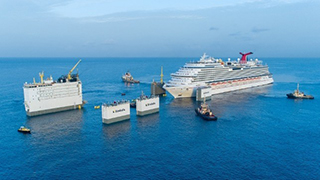 Heavy lift ship raises Carnival Vista out of the water.

It has been a tough July for Carnival Vista.

The ship lost power at sea on 2JUL, knocking out lighting and air conditioning in certain sectors of the ship for a brief period. Then came unrelated propulsion problems that resulted in cancellations of its 6, 13, and 20 JUL sailings.

Things got worse. Docking space was unavailable in the Grand Bahama Shipyard due to a crane collapse back in April which damaged both Oasis of the Seas and the docking space.

This forced Carnival to turn to an unusual repair process for which they hired the services of the world's largest semi-submersible vessel, BOKA Vanguard. As Cruise Week went to press, the operation was underway, with the semi-submersible vessel being used as a floating dry dock to repair Vista's Azipods -- components used to propel and manoeuvre the ship.

Despite the unusual nature of the repairs, the most likely alternative given the lack of space at Freeport Marine would have been bringing the ship all the way over to Europe to be fixed.

Carnival Vista arrived in Freeport on 12JUL and Houston-based cruise tracker Othell Owensby reports, "Vista was essentially onboard (for lack of a better term) the BOKA  Vanguard, the heavy lift carrier designed for this type of operation, at the Freeport anchorage that afternoon." Vista is due back in service on 27JUL.

Carnival Corp. has not divulged the cost of the operation, but during the second quarter earnings call, CEO Arnold Donald indicated it is higher than normal.

“For full year, voyage disruptions related to Carnival Vista are expected to have a financial impact of approximately eight to 10 cents per share, and that's from a combination of modified itineraries, cancelled sailings, and the unusual nature of the repair given the unavailable damaged dry dock in Grand Bahama Shipyard, where repairs otherwise would have occurred."

To put that figure in perspective, it's far greater than the four to six cents per share the removal of Cuba cruises is costing Carnival Corp. Eight to 10 cents a share translates to about US$50-$70 million given Carnival's 693 million outstanding shares.