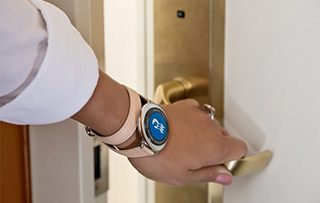 Cruise Week Correspondent Art Sbarsky sailed on Caribbean Princess recently, providing him an opportunity to see the progress being made with OceanMedallion.


When I sailed on Caribbean Princess back in February, it was still early days for the OceanMedallion. John Padgett, a senior member of the team putting it together, told me, "We're in lap two of a very long race." This recent cruise gave me an opportunity to see how it was progressing -- lap three, if you will.Bottom line: there have been significant advances in what can be done using OceanMedallion, and my previous experience helped make me more capable this time.Pre-Cruise
I filled in the Cruise Personalizer section on the website then completed the OceanReady part, which I couldn't handle on my own the first time. This time I realized it's really not that hard.Because my cruise was confirmed just a few days in advance, I couldn't have the medallion itself sent to my home. Also, due to timing, the system apps could not be added to my phone ahead of time.Boarding
I got to the terminal at Port Everglades and zipped through the whole boarding process.After showing my completed paperwork and passport to one of the many personnel waiting inside security, he tapped, tapped, tapped on his tablet and within just a few minutes I had my medallion in hand and was heading to the ship. No lines, no fuss.A constant that didn't change from the first trip: the medallion unlocks your stateroom door as you get close. One caveat, if your stateroom is right near the elevator or stair lobby, you'll get to your room before the door sensor reads the medallion.Pick and Choose
After unpacking, I headed to the area where the Navigator (i.e., medallion) experts were waiting. One of them got me started loading the apps and I took over from there. Fairly easy.Then came signing up for the ship's Internet. Total cost for the week of unlimited use was US$52.49. Inexpensive and quite fast. I never had to log out or log in.The only three apps I figured I would use: OceanConcierge, OceanNow, and OceanCompass. There are others available, including PlayOcean, OceanView, and OceanCasino but I used those the last time and didn't want to get overly "apped" out this cruise.Each person or group will have different needs.Schedule & Shipmates
Most helpful to me was the OceanConcierge. The primary feature is the daily schedule, which comes up first and is easy to follow. It beats carrying around an extra copy of the daily schedule.Click on any given event and it shows more details. The menu bar gets you to other items, such as one's statement, times and locations for everything, including restaurant opening hours, restaurant menus, individualized event schedule, and more.OceanCompass wound up having a surprising number of meaningful features. I met people on board and added them as Shipmates, but it's especially good for families or groups travelling together.There's the ability to locate anyone you sign up as a Shipmate (presuming they agree to be in contact). The ship locator finds them and even offers a suggested route to track them down. You can e-chat with any of your Shipmates. If a message comes through it also shows up on your e-mail system, such as Outlook, meaning you don't necessarily have to be looking at OceanCompass.If someone doesn't want their location to be known, they can easily opt out.OceanNow
OceanNow has two handy features. One is Journey View, which gives guests the opportunity to look at the entire cruise itinerary day by day. It's very helpful for planning purposes, again especially helpful for couples and families.The second is the ability to order food, beverages, etc., supposedly no matter where you are on the ship.This is the part where things did not go as planned. The sensor often misread where I was, making it harder to order or for crew to find me. You can't always order things like pizza and burgers where you are.If you're on the soda package, as I was, and want an included fountain drink, you need to go to a bar rather than ordering it via the app, which only offers cans. On private island Princess Cays there are no fountain drinks. You can buy a can but it's not covered by the package.Conclusion
During the cruise, I spoke with people from places like Quebec, Pennsylvania, Kansas, China (via Los Angeles) and more. Everyone agreed that when the app did what it was meant to do, it was easy and, as Princess likes to say, frictionless. But there was some frustration when it wasn't perfect.However, as Padgett says, it's a long race. And I suspect Medallion's glitches will be worked out, just as mine using it seem to be.