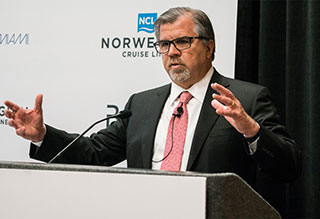 Wall Street has had mixed views of cruise companies in 2019 as the lines embark on a major expansion program in North America.There are some positives. Norwegian Cruise Line Holdings stock has climbed more than 20% since the 2018 market closed on 31DEC. However, during NCLH's recent second quarter earnings call, Chairman/CEO Frank Del Rio pointed to several reasons for even more optimism by the investment community.After reporting that the upcoming Norwegian Encore is off to the best booking start in the Caribbean for any ship in NCL's history, Del Rio told the investor community, "For] 2020 we have in essence a full year benefit of Encore, our newest, biggest vessel in the Norwegian fleet."Del Rio then turned to Regent Seven Seas. "And we have 10 months of Seven Seas Splendor, which will be by far the highest-yielding ship in our fleet and possibly in the industry. That's a 26% increase in the capacity for the Regent fleet."Not only is the ship ahead of any newbuild that Regent has ever introduced, but the brand itself is ahead in load considerably versus this time last year and in pricing."On the topic of what he calls the "capacity conundrum," Del Rio was characteristically blunt. "Capacity growth is an overblown metric...I can't believe it's still out there."He explained: "This is a grossly underpenetrated industry; less than 4% of the world has cruised, less than 2% of the world spend on hospitality is spent on cruises. There are more hotel rooms in Orlando and Las Vegas combined than there are cabins in the world's cruise fleet."Finishing up, Cruise Week reports that Del Rio sounded frustrated: "I don't know how many more examples I have to give you. We take on 26% growth in one particular brand and it's full at higher prices. So find some other excuse [than overcapacity] because this one is just not a good one to focus on."