For A Tropical Storm, Dorian Is Playing Havoc With Cruise Itineraries

Itineraries are being revised for many ships in the Caribbean due to the presence of Tropical Storm Dorian.

A tropical storm warning is also in effect for Martinique and Puerto Rico. Hence,
For example, hurricane tracker Othell Owensby reports that Carnival Breeze, which was to be in San Juan today, will now spend the day at sea.

Disney Fantasy was to be in Tortola yesterday but destination changed to Grand Cayman. Today, Cozumel is slated to replace St. Thomas as the port of call for that Disney ship.

There's many more, but the point is that the storm seems to be having a lot of impact and it could spread. "The National Hurricane Center site cone now includes Florida which is going to be interesting for turnarounds this weekend," observes Owensby.

The NHC also reports, "Uncertainty in the intensity forecast later this week remains higher than usual due to Dorian's potential interaction with Hispaniola and Puerto Rico."

Owensby analyzes the reports: "NHC states it will have a better idea on Thursday of the path and strength after Dorian passes either between Puerto Rico or over the mountainous terrain of the Dominican Republic on the island of Hispaniola."

With the cone change coming right up to the Bahamas, it becomes necessary to keep an eye out for the 4-5 day ships. "Their itineraries will be impacted if there is a problem getting into Nassau, Freeport or any of the private island ports in the Bahamas," says Owensby. 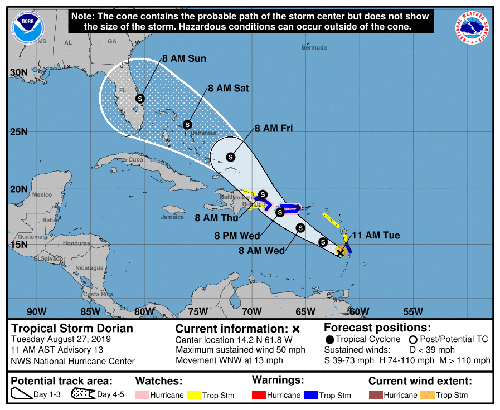