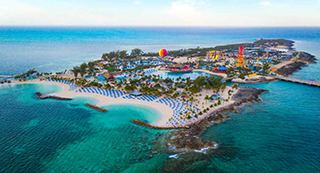 With Tropical Storm Dorian intensifying, cruise lines have upped the changes in itineraries. For instance, Royal Caribbean has closed CocoCay until 4SEP, which will impact numerous sailings in the week ahead.In its statement Royal Caribbean said, "based on current projections of the storm path, we decided to close CocoCay on 28AUG."MarineTraffic reports that instead of CocoCay today, Navigator of the Seas called in Nassau and will spend today at sea. Numerous other changes were announced by Royal Caribbean yesterday afternoon.The reason for the abundance of caution with CocoCay is that even if a hurricane or tropical storm misses the major Bahamian islands, all of the out islands/private islands are just feet above sea level. Few have any kind of shelter, which makes them vulnerable to storm surge or just high waves.Meanwhile, Carnival Cruise Line has cancelled its call at Amber Cove today on Carnival Magic, replacing the port with a day at sea. On 30AUG the Magic will call in Nassau (previously at sea). In some cases, it's just a case of musical ships, trading one day for another. For instance, on 30AUG Carnival Sunrise is replacing Grand Turk with San Juan. On 31AUG, instead of San Juan, Sunrise will be in Amber Cove. On 1SEP, instead of Amber Cove, Sunrise will be in Grand Turk.So in a nifty series of moves, Carnival Fleet Operations gets all three port calls in, just on different days.From the Weather Channel to reports from National Hurricane Center, it's clear that the storm is strengthening. There is now talk about Dorian carrying sustained winds of up to 185 km/h if and when it hits the U.S. mainland.Yesterday afternoon, The U.S. Coast Guard activated port condition WHISKEY for several ports in Florida, including Miami, Pt. Everglades, Tampa/St. Petersburg due to the "Expectation of sustained tropical storm force winds that may arrive within 72 hours."However, WHISKEY, while a warning, means that port facilities are open to all commercial traffic, including cruise ships. Precautions are strongly recommended.