OJ On Location: Carnival Boss Answers The Questions You Would Ask 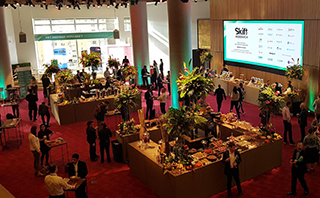 Some of the 1,000 delegates from 39 countries networking at the Skift Global Forum 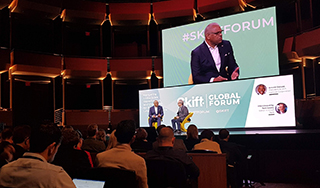 Arnold Donald in conversation with Tom Lowry, Editor-in-Chief of Skift

It’s not every day you are in the company of the CEO of Delta Air Lines, the President of American Express Travel and the President and CEO of Carnival Cruise Lines. But that’s the sort of thing that happens at the annual Skift Global Summit, held last week in NYC.

And it’s telling that in a line-up of 31 senior exec guest speakers – each session was a bite-sized 15 minutes or so --  that the first on-stage chat featured Carnival’s Arnold Donald. As the head of massive Carnival Corporation (eight cruise lines including HAL, Seabourn and Cunard), he’s often in the limelight as the cruise industry comes under scrutiny for modern woes such as pollution and overtourism.

This past summer, Carnival Corp was fined US$20 million for knowingly polluting the ocean. But when pressed to discuss the issue, Donald said:

“The biggest threat to marine life is overfishing – by far. Then there is fertilizer run-off. Most plastic in oceans comes from land – along rivers and so on. We have targets to reduce our single-use plastics. We are all citizens of the world: who wants to go to a polluted beach?”

Often when people are cruising, Donald said, their carbon footprint is less than when they are at home (driving their cars etc.) Carnival Corp is looking into liquid natural gas as a fuel option, “It’s still a fossil fuel. But you’ve got to start somewhere.”

During his session, Donald was asked about cruise lines being the “villain” in overtourism. “Venice is a good example. They get 25 million visitors a year, of which 1 to 2 million come from cruise ships. But we are visible. We must respect the locals’ wishes regarding tourism. What do they want?”

And about the Bahamas in light of Hurricane Dorion’s recent devastation? “The Freeport shipyard is up and running and providing water to locals. And the economy is coming back fast.”

On a lighter note, Donald also spoke of the new Medallion program on Princess Cruise Line. These quarter-sized devices, which can be worn as a variety of jewelry pieces, are a passenger’s optional passport to purchasing services and goods on board, booking excursions, getting online, accessing staterooms, simplifying disembarkation and even keeping a record of preferences such as a favourite drink so the crew will never need to ask. And every crew member will know your name.

Are passengers concerned about privacy issues? “Of the first 15,000 passengers who had the choice for the program, only 6 opted out. And within a few days three of those asked if they could opt in,” said Donald. The data is flushed at the end of the cruise – unless you want to keep it for future sailings.

“Personalization, customization:  that’s what it’s all about.”