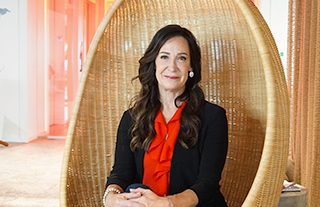 The group says the annual observance and theme offer the chance to raise awareness of the importance of diversity and gender equality in the cruise industry as well as highlight the significant contributions of women at the helm of cruise leadership.

“A cruise ship may be a vacation destination for guests, but it's also a workplace for a diverse crew onboard. Gender diversity is as critical to a ship as it is to any enterprise, encouraging teamwork and creativity while bringing a range of perspectives,” said Kelly Craighead, president and CEO, CLIA.

“Elevating women to leadership positions in the cruise industry makes good business sense. Research shows women hold the purchasing power when it comes to decisions and bookings in the multi-trillion-dollar travel and tourism industry. It’s more important than ever to have women at every level of leadership in the cruise industry bringing better representation and customer understanding.”

Today, the cruise industry is recognizing the historic path women have navigated in cruise leadership roles including:

Ellen Bettridge – President and CEO of Uniworld Boutique River Cruise Collection and U River Cruises, Ellen Bettridge, is leading luxury river cruising in new directions. In her leadership role, she helps to further Uniworld’s positioning and innovation in the river cruise industry.

Kelly Craighead - At CLIA, Kelly Craighead is the third female CEO leading the cruise industry within the past ten years. She brings a passion to empower female leaders and regularly offers her insight and advice to women in travel and tourism.

Christine Duffy – As the first female president of Carnival Cruise Line, Christine Duffy leads the industry’s largest cruise line that includes a fleet of 26 ships, that sail 5.2 million guests annually and employs more than 40,000 people from 110 nations around the globe.

Pamela Hoffee - In 2018, Avalon Waterways announced Pamela Hoffee was taking the helm as Managing Director, overseeing all-things river cruising for the company. For 15 years, Pam has led product and operations for the Globus family of brands. As the managing director of the company, Pam is steering this leading river cruise company into the future, supported by a team across the globe.

Kristin Karst - AmaWaterways executive vice president and co-founder Kristin Karst is a charismatic entrepreneur leading her teams by example and following what she calls her four pillars for success: positive thinking, passion, partnerships and personal interaction.

Kate McCue - Captain Kate McCue became the first American woman to captain a cruise ship in 2015. She is currently at the helm of Celebrity Cruises’ newest ship, the 129,500-ton, 2,918-guest Celebrity Edge –  a billion-dollar ship designed by a collective of world-class designers and overseen by Celebrity CEO Lisa Lutoff-Perlo. Kate takes great pride in being a role model for women around the world and championing diversity in the maritime industry.

Serena Melani - Captain Serena Melani is an influential 30-year veteran of the maritime industry – one of the first women to work in maritime early in her career. She joined Regent Seven Seas Cruises where she was appointed the cruise line’s first female Master Captain.

Lisa Lutoff-Perlo - In 2014, Lisa Lutoff-Perlo, president and CEO of Celebrity Cruises, became the first woman to lead one of Royal Caribbean Cruises Ltd.’s brands, with a diverse, global workforce on land and at sea. She is a champion for diversity in the cruise industry and, in her role, has developed many initiatives to recruit more women to shipboard leadership roles.

Edie Rodriguez – As Americas Brand Chairman and Special Corporate Advisor for PONANT Cruises, the world’s leading luxury yacht expedition cruise line. Edie has over 30 years of experience in executive roles in the cruise and travel industry.  She was named Ernst & Young’s “Entrepreneur of The Year” in May 2017, and selected as Luxury Daily’s “25 Luxury Women to Watch for 2017.

Wendy Williams - Virgin Voyages, the newest cruise line to enter the industry, has formed a “Scarlet Squad” with the explicit intent of “growing leadership roles for women in marine, technical, and hotel management positions onboard. Captain Wendy Williams is at the squad’s helm and is the first captain appointed to Virgin Voyages and the first Canadian woman to ever captain a major cruise ship