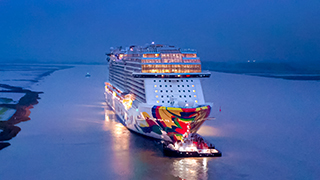 Norwegian Encore has left the shipyard
to head out to sea.

Norwegian Encore has completed another major construction milestone, as the next ship in the Norwegian Cruise Line fleet departed the Meyer Werft shipyard in Papenburg, Germany and sailed down the Ems River towards the North Sea.

At nearly 1,100 feet long, with a gross tonnage of almost 170,000 and a guest capacity of 3,998, the ship will be delivered to the cruise line on 30OCT. She will be christened by Grammy Award-winning artist Kelly Clarkson in Miami on 21NOV and will commence seven-day voyages to the Caribbean on 24NOV.

“Today we celebrate a huge milestone for our history-making ship,” said Andy Stuart, president and chief executive officer of Norwegian Cruise Line. “Now is when the anticipation truly begins to build. Our partners at Meyer Werft have collaborated with us to bring the industry-leading experiences from the successful Breakaway Plus class ships to Norwegian Encore, making her truly the best in class.”

Among the ship’s most touted features:

Norwegian says that in addition to featuring many of the restaurants and lounges that have made the Breakaway Plus class one of the most successful in the company’s history, Norwegian Encore will debut a new elevated Italian dining experience, Onda by Scarpetta, in collaboration with LDV Hospitality.

The Tony Award-winning musical “Kinky Boots” will headline the onboard entertainment, with returning guest favourites “The Choir of Man,” “Happy Hour Prohibition: The Musical” and the rocking Beatles cover band of The Cavern Club.