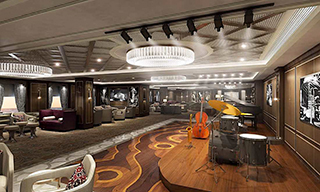 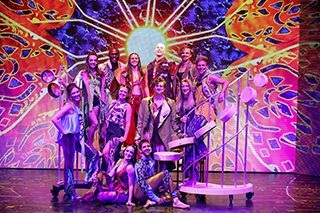 Here's a look at entertainment improvements by two key Carnival Corp. brands for their newest ships, starting with a report by Cruise Week Correspondent Art Sbarsky.

“It takes a significant amount of time and money to put together one of the production shows guests get to see on cruise ships these days. Whether it’s a themed show, an ocean-going version of a Broadway show, or just a series of musical/dance numbers, it’s a lot of effort.

My behind-the-scenes visit to the Carnival Studios facility in Davie, Fla., allowed me to see just how much is involved, especially considering that up to 14 different shows might be in rehearsal during any given week, all while other new shows are being developed.

Our group got to see musicians, costumers, sound and automation technicians and, of course, a number of onstage performers. I stopped counting after I got to forty of these talented singers and dancers, who were extremely gracious about having our group essentially invade their working space.

The Carnival Studios facility is mighty impressive. Opened in May 2017, the 44,500-square-foot facility houses nine music/band rooms, four vocal studios, three dance studios, and more; we got to see many of them in action. One room that stood out was where the costuming was being done for an upcoming show featuring iconic New York City buildings.

We saw a rehearsal for the final number for Rock Revolution (featuring music of the late 1960s) which will debut on Carnival Panorama in Long Beach, CA this DEC.  After a break, we got to see a full run-through of the entire 45-minute show with costumes, lighting, and sound. Guests are sure to enjoy the show: think flower power and music from Hair to Simon and Garfunkel.

While the jazz concept is new for Princess, Ho says it also represents continuity, as Princess has always emphasized live entertainment.

"If you look at Princess Live, we have live game shows, live performances, live comedy, live music," he points out. "And whether it be from Broadway shows with the composer of Wicked, Steven Schwartz, all the way down to the comedy or intimate string quartet that we bring aboard, people like our live entertainment."

A Unique Combo At Sea

The Take Five jazz theater experience combines different forms of live entertainment. "In a typical jazz place you would sit down, listen to music, and talk,"  says Ho. "With our Take Five experience, a big component will be storytelling--that's why we say 'jazz theatre.'

"It could be jazz stories around a city with a rich jazz history or it could be themes around a particular jazz artist [such as Billie Holiday or Dave Brubeck]. But we want to bring it together with narration and audiovisual to amplify the story."

In true Princess fashion, Ho says there will also be guest participation in the Take Five jazz theatre.