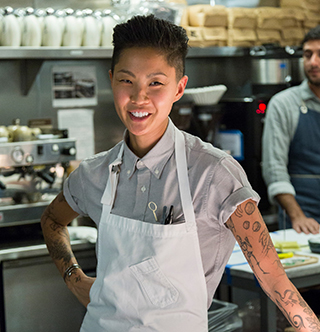 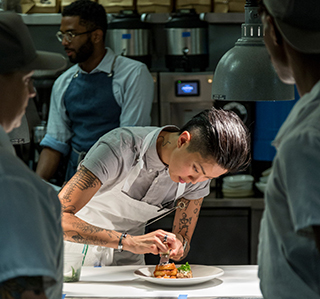 HAL says Kish’s “playful yet refined” cuisine will be featured on the menus in the Dining Room, showcasing French and Italian traditions with a nod to her world travels and diverse upbringing.

Kish’s dishes also will be featured exclusively at Pinnacle Gala, a new pop-up dining experience in The Pinnacle Grill for cruises of 10 days or longer. The Pinnacle Gala will deliver a multi-course dinner event.

“Kristen is one of the most talented, authentic and genuinely respected personalities in the culinary world, and she is the perfect complement to Holland America Line’s Culinary Council,” said Orlando Ashford, Holland America Line’s president. “We set out to bring together a diverse group of renowned chefs to guide our menus and wow our guests in every dining venue on board. They each excel in their own specialty; so whether it’s appetizers, main courses, or dessert, our guests are going to have a memorable and elevated experience.”

Kish recently partnered with Sydell Group to launch her first restaurant, Arlo Grey, in Austin, Texas. The restaurant melds Kish’s precise technique and experience with a nostalgia for dishes from her upbringing, world travels and the bountiful ingredients of Central Texas.

Kish was born in South Korea and adopted into a family in Kentwood, Michigan.  She showed an affinity for cooking at a young age and attended the world-renowned Le Cordon Bleu culinary school in Chicago, Illinois.

Early in her career, Kish worked in many high-profile restaurants including Michelin-star Chef Guy Martin’s Sensing and Barbara Lynch’s Stir. Kish competed on Bravo’s “Top Chef” season 10, filmed in Seattle, where she won the title, becoming the second female to win the prestigious competition.

She went on to become chef de cuisine at Menton, a Relais & Chateaux restaurant in Boston, Massachusetts, and left in 2014 to travel the world and write a cookbook.

Kish was co-host of “36 Hours,” a Travel Channel show that partnered with The New York Times to bring the hit newspaper column to television. She also toured with her first cookbook – “Kristen Kish Cooking” – which launched in 2017.