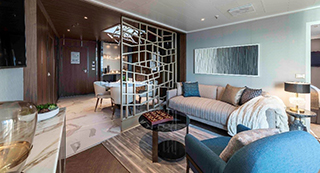 Sky Princess will make her debut in North America on 1DEC, 2019, for a season of Caribbean cruises from Ft. Lauderdale.

With the debut of Sky Princess, Princess Cruises marks the first time a ship has been built as a Princess MedallionClass™ ship. The OceanMedallion™ wearable device delivers personalized service through enhanced guest-crew interactions, eliminates friction points and enables interactive entertainment.