Norwegian Cruise Line is celebrating the christening of its latest – and last – ship in the Breakaway-Plus class, and after a total of eight ships launched under the Breakaway umbrella since 2013, all it needed was an Encore.

Norwegian Encore was named in Miami yesterday afternoon, and Open Jaw's Karen Dahdah and Elana Karpman were on hand to witness the ceremony. 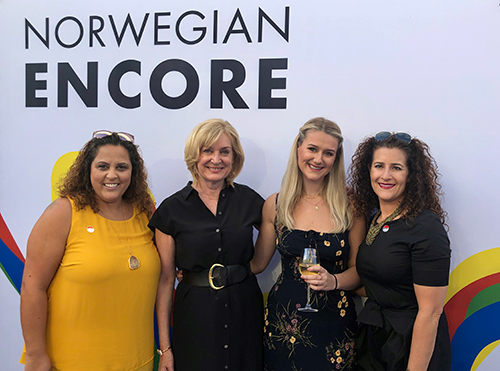 Over 3,500 guests consisting of travel partners, investors, government officials, media, and family and friends of NCL attended the pier-side ceremony and celebration at Port Miami.

Clarkson officially christened Norwegian Encore with the champagne bottle break across the ship’s hull before performing some of her chart-topping hits.

According to OJ commentators, Karen and Elana, “The show was amazing! From sneak peeks of Choir of Man and Kinky Boots to Kelly Clarkson’s incredible voice, it was a Broadway level experience.” 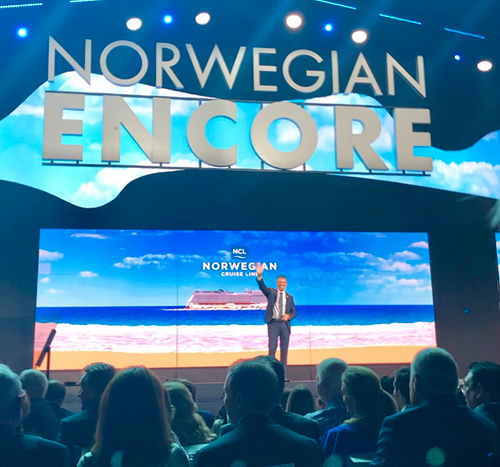 Outgoing President and CEO Andy Stuart reminisced about his 30 years with NCL to
rousing applause amid a tearful farewell.

Outgoing President and CEO Andy Stuart, who has become synonymous with the brand over his 30 year career with NCL, was greeted to rousing applause amid a tearful farewell. 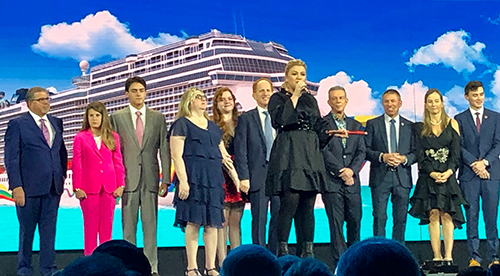 “Norwegian Cruise Line has been sailing from Miami for over 50 years,” said Del Rio. “Five years ago, we launched our history-making Breakaway Plus class and today, we are proud to christen Norwegian Encore, the final ship of this class and a true representation of the evolution of the brand, right here in our hometown of Miami.”

Encore shares the same essential DNA as its fleetmates Norwegian Bliss and Norwegian Joy, but with a few new-to-Norwegian features, like the high-end Italian restaurant Onda by Scarpetta, and new shows including the Broadway hit incorporating Cyndi Lauper tunes, Kinky Boots that was also performed for guests at the christening ceremony.

The 180-degree panoramic Observation Lounge, which was introduced to great acclaim on Norwegian Bliss, is back. The huge space is located at the bow of the ship and offers expansive views at sea, a cocktail bar and snacks. 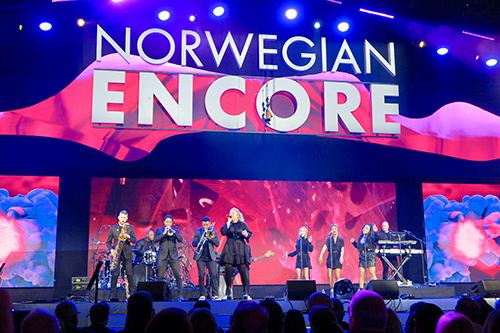 After the official blessing of the ship, Clarkson graced the audience with a
performance of her biggest hits.

With families in mind, Encore reintroduces Speedway, the world’s longest go-kart track at sea with high-speed curves extending over the side of the ship. There is also the largest outdoor laser tag arena with the addition of augmented reality elements, a new immersive escape room and a 10,000 square foot virtual reality arcade called Galaxy Pavilion.

As part of a recent partnership with JUST Goods, Norwegian Encore will be the first ship in the fleet to be plastic bottle-free.

On day 3 of the inaugural, guests will disembark at the cruise line's private island, Great Stirrup Cay, where OJ’s Karen and Elana will endeavour to report back to HQ on the beach experience.