MSC’s Muskat: Cruise Line Is Moving At "A Million Miles A Minute" 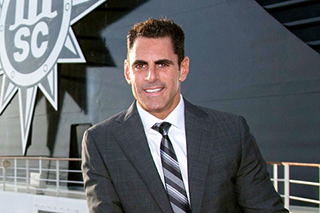 One of the most important of the moving pieces in MSC Cruises' business success moving forward is how well expansion and other changes going on at the brand are accepted by consumers and the trade.

In a conversation with Cruise Week, EVP & COO MSC Cruises (USA) Ken Muskat breaks down what is going on and how both the industry and MSC will benefit.

A highly regarded industry veteran, Muskat puts it all in perspective: "I've been in the industry my whole career, and I've been part of companies with major things going on, but I don't think ever part of a company that has had so much happening at the same exact time. So it's a little insane, but super exciting."

Dealing With the Delay

One of those happenings is MSC's private island, Ocean Cay, where the first scheduled call initially slated for 9NOV has been delayed until 5DEC.

While acknowledging the delay was disappointing, Muskat says consumer and travel agent feedback has been positive in terms of how it was handled. "The compensation of $100 per stateroom onboard credit and a 20% future cruise credit based on what they paid on the cruise that they're on has been very well received," he reports.

MSC's message is that the explanation for the delay has been heard and accepted by both customers and travel advisors. "We have positioned it in a way that we don't want to bring guests there until we are completely comfortable in the guest experience that we're providing," says Muskat.

On the consumer side, he reports, "We're not getting cancellations and we're not seeing anything that gives us a representation of any kind of slowdown in 2020 bookings because of this."

As for the trade, he points out that MSC had cruises on Meraviglia departing 17NOV and 21NOV on which they brought onboard well over a thousand travel agent partners. "We have 450 staterooms on each sailing for the travel advisors and their guest, who was often another travel advisor."

They came in big numbers, he says, and there were no cancellations over the itinerary change: "They're coming back to us and saying, 'I wanted to see Ocean Cay of course, but I also wanted to see the new MSC brand, and not only had I not seen MSC Meraviglia, but I haven't seen MSC for years.'"

The truth is there's a lot going on with MSC beyond the island. "All those travel advisors still came because they know they'll have a chance to see the private island in the future," says Muskat.

In the Scheme of Things

This is not to say the delay of Ocean Cay is inconsequential.

"It's very important for us, and we don't want to ever change an itinerary, because people book their cruises because of that itinerary," says Muskat. "But at the end of the day, we will have cancelled seven itineraries from going there. And in the scheme of things when you're talking about an island that's been built for over three years, delaying by seven sailings isn't the end of the world."

Ocean Cay will still be a key part of MSC's Wave Season plans.

"This is still going to be a huge part of our 2020 bookings," says Muskat. "We want to leverage Ocean Cay to drive business to MSC, drive business to the Caribbean, and help increase prices for the industry. Going forward, 5DEC continues to be a key highlight for us."

Cruise Week asked Muskat: "Will the private island experience on an early February sailing be the same as if one were to see Ocean Cay in early May?"

"The things that are being done on the island now and will continue to be done for the next couple of months are mostly cosmetic things around the landscaping," he replies. "Also, we're building a second buffet, which was always scheduled to be done in the February timeframe, as well as working on some areas with the MSC Yacht Club Beach."

Muskat says there's going to be landscapers planting trees and the like in the weeks ahead: "But it's not going to impact the guest experience at all. When you're talking about cruises coming up in January, February, March, the island is going to be complete.

"As a matter of fact, the only thing that I would say is going to be ongoing is the learnings for us, and even by the February-March time period, this should already be in a very complete stage."

He explains that the traffic patterns of passengers are unique for MSC because the ships are there all day and all night.

"So it's a little bit different than some other private islands, where you bring a ship there with 5,000 people," says Muskat. "Then you know the majority of guests are going to be there first thing in the morning, they're going to grab their lounge chair, they're going to hang out at the island until about 3 pm and then they need to get back on board."