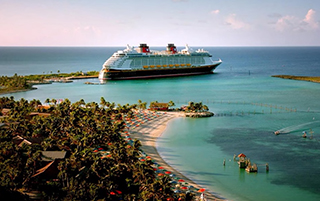 The latest take from cruise industry analyst Patrick Scholes of SunTrust Robinson Humphrey indicates that Caribbean bookings have turned a corner following hurricane disruption in September. Europe 2020 bookings are strong, with some pricing issues, but Alaska “could go on sale” due to higher 2020 capacity and softness on bookings and prices.

"Our ‘big data’ intelligence on forward booking volumes and pricing from large travel agencies and other sources over the past eight weeks showed a strong bounce-back in booking volumes post the hurricane disruption in September," writes Scholes.

That said, SunTrust observes that demand is being stimulated by pricing cuts, most notably for close-in Caribbean sailings.

Also, there are other signs of post-Dorian effects: "Subsequently, this emphasis on unfilled close-in cruises has resulted in the booking window pulling back to approximately 180 days vs. approximately 215 days observed in September."

Looking ahead to 2020, it appears a bit of a mixed bag at this point.

"Specifically, the pricing environment has gotten a bit more difficult and there has been an increase in promotional/value-add activity since the hurricane," says Scholes. "Additionally, we believe the companies are aggressively base-loading going into the uncertainty of an election year."

However, with strong bookings over the past six weeks, Scholes says industrywide bookings for 2020 now are back to +10-12% year-over-year, a figure on the rise, though still a drop from the +13% reported pre-Dorian.

Pricing challenges have been seen in recent weeks: "While the cruise lines initially held pricing in September, that discipline did not hold in October and early November," writes Scholes.

Industrywide, he reports 2020 pricing was, on average, up approximately 4.5-6.5% eight weeks ago compared to the same time period for 2019. "However that range has dropped to +2-4% with the biggest pricing cuts occurring for unsold berths on Caribbean cruises in first and second quarter of 2020."

Scholes writes that such observations are not dissimilar to what Norwegian Cruise Line Holdings, Ltd., discussed on its earnings call, when noting the temporary effects of the loss of Cuba in the first half of 2020 compared to the first half of 2019. "The good news is that similar to what NCLH said on their earnings call, we also observe second half of 2020 as steady and strong with no observable discounting."

SunTrust reports North American cruisers are showing strong bookings for Europe in 2020, though pricing on the books is not as strong as prior checks.

Unfortunately, no rebound in Alaska pricing is foreseen at this point: “Alaska has well documented new capacity issues (new supply from NCLH and RCL likely impacting pricing power for Carnival Corp.) and we expect a capacity increase coming in 2020 (+6.5%).”

There's softness in both reservations on the books and pricing, with the latter in negative territory year over year. "We would not be surprised to see Alaska go on sale," concludes Scholes.

On the positive side, the report gels with recent reports from the trade regarding luxury sales. "The upper end of the market continues to show outsized strength, as the super-premium brands continue to outperform the mass market," writes Scholes. "Our independent checks confirm the luxury strength."