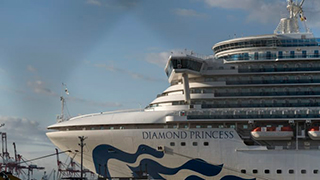 Two elderly cruise ship passengers with coronavirus who were on Princess Cruises’ Diamond Princess have died, according to Japan’s health ministry.

An official confirmed that the 87- and 84-year-old victims had been previously hospitalized in serious condition and had existing chronic diseases.

At press-time, 621 cases of the virus had been identified among the 3,711 quarantined passengers and crew, making the ship the site of the most infections outside of China.

Japan's government has been questioned over its decision to keep people on the ship, which some experts have called a perfect virus incubator.

Hundreds of passengers – 443 to be exact – were released from the ship’s quarantine and disembarked yesterday in Yokohama after spending the required 14 days in quarantine. Japanese pax were free to go home, but foreigners may have to be quarantined again when they return to their home countries.

For example, according to a letter from the Centers for Disease Control and Prevention to American passengers who chose to remain on the ship, they must remain symptom-free and not have any positive tests for an additional 14 days before they can re-enter the U.S.

In other cruise coronavirus news, Oceania has announced that it is cancelling all voyages in Asia through JUN. The changes start with Nautica's 4MAR roundtrip Singapore.

In a letter to travel advisors from Senior VP Sales Nikki Upshaw, Oceania said all guests on cancelled sailings will receive a 100% refund of the cruise fare paid and future cruise credits, etc. Commissions will be protected.

Among other changes, the world cruise scheduled on Insignia will operate a revised itinerary that skips Asia.