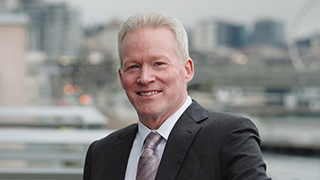 Andrew Todd, President and CEO of Xanterra Leisure Holding, LLC, the parent company of Windstar Cruises, will continue as CEO of the small-ship cruise line. Delaney will provide advice to the brand during the transition through March.

Christopher Prelog, Windstar’s Vice President of Fleet Operations and former VP at Seabourn Cruise Line, will assume the role as Chief Operating Officer of Windstar Cruises. Prelog's entire professional career has been in hospitality and the cruise industry. He began his career on ships and now has risen to the rank of COO with Windstar.

In addition, another respected name in the world of travel, cruising and hospitality will help with the transition. Betsy O'Rourke, Chief Marketing Officer for Xanterra and the former SVP of Marketing at Royal Caribbean, will lend her expertise to the Windstar brand during a time of growth and expansion highlighted by the US$250 Million Star Plus Initiative, where all three of Windstar's yacht-like ships (half of the fleet) are being lengthened to feature new suites, dining venues and public spaces. The first of the "new" stretched ships, Star Breeze, returns to service in MAY.