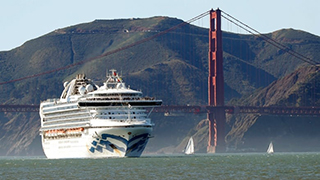 Cruise Week reports that yesterday was another nerve-wracking day for the cruise industry.

The latest from Princess Cruises: "In collaboration with the U.S. Centers of Disease Control and local authorities, samples were collected today from 45 people on Grand Princess (which includes a mix of guests and team members).

"The samples were delivered to the California Department of Public Health in Richmond for processing. The results of these tests are expected by tomorrow (6MAR)."

On the financial front, the hammering of cruise stocks accelerated on Thursday, with the largest single-day percentage drop-off since the advent of coronavirus began its devastation of cruise stocks six weeks ago. Royal Caribbean fell 16.29% to close the day at $65.78. Carnival Corp. fell 14.4% to $27.87, and NCLH fell 13.36% to $28.59.

Overall, the Dow Jones Industrial average fell 3.58% for the day.

The Grand Princess development was seen as a factor for the cruise sell-off, as it crashed the industry's hopes that the Diamond Princess situation would turn out to be a one-off. Until now, post-Diamond cruise ship coronavirus scares had turned out to be false alarms.

Unlike during the Diamond Princess saga, however, there is so much coronavirus news that the Grand Princess, while clearly of importance, is just one of the many coronavirus news stories of the day. Nevertheless, the plight of the passengers onboard felt particularly visceral.

So whatever happens with the initial test results, the uncertainty around the passengers' plight – including around 235 Canadians -- continues. During the afternoon, the office of the Mayor of San Francisco put out the following announcement: "...Testing protocols are being put in place on the ship for those passengers and crew that have shown flu-like symptoms or may have been exposed to the virus, and that process is expected to begin today."

With no word on how long the process would take, the statement continued, "Once that has happened, the CDC and the state will determine the most appropriate location for the ship to berth to provide for the safety of the surrounding community as well as the passengers and crew.