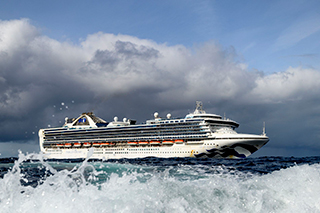 Just about every aspect of the travel industry is feeling the pain created by the global coronavirus outbreak, but perhaps none more so than the cruise business. The weekend saw a series of developments that plunged the sector further into troubled waters.

On Friday, reacting to “rumours” that the U.S. government was considering issuing a travel alert advising American travellers to temporarily avoid cruising, CLIA put out a press release in response.

“Any action to restrict cruising is unwarranted, and at odds with the World Health Organization which “continues to advise against the application of travel or trade restrictions to countries experiencing COVID-19 outbreaks," CLIA stated.

“Cruise activity supports travel agencies, airlines, hotels and a broad supply chain of industries that stretches across the United States. With the proactive measures in place by the cruise industry based on prevailing guidance from global health authorities, restricting cruising is unreasonable and will have long-lasting detrimental effects on the U.S. economy well beyond the travel and tourism industry.”

Despite CLIA’s advocacy, its fears were realized when government officials in both Canada and the U.S. issued warnings.

On Friday, Canada's chief public health officer warned travellers, especially the elderly and those with fragile health, to reconsider going on cruises.

"Think twice about going on cruise ships," said Dr. Theresa Tam, noting they "present environments where COVID-19 can spread easily given close contacts between passengers and crew for significant periods of time."

This was followed by a U.S. State Department alert posted to its website Sunday: “U.S. citizens, particularly travellers with underlying health conditions, should not travel by cruise ship,” the State Department wrote. “Americans should not rely on being evacuated if other countries subject them to quarantine, “the department added.

The Situation Is Evolving At Breakneck Speed

To demonstrate how quickly the situation is evolving, the U.S. warning came just a day after Vice President Pence sat down with cruise line executives in what was described as a “positive” meeting.

Following the meeting, Pence said: "We anticipate early next week that the cruise line industry and our administration will be able to announce significant progress in ensuring that we're doing all that we can to protect the health and well-being of the passengers of our cruise lines, the crews, and, just as importantly, the communities to which they return and our nation as a whole.

Pence praised the role of the industry: "It brings great joy, it's a great entertainment value for Americans, and we want to ensure that the American people can continue, as we deal with the coronavirus, to enjoy the opportunities of the cruise line industry and be confident that the industry and our government at every level are working in concert to ensure their health and well-being.”

Travel agents with clients on Regal Princess were informed that yesterday’s departure out of Ft. Lauderdale was cancelled. Commissions are protected.

The ship was scheduled to dock early Sunday, but was held off the coast of Florida as two crew members who had transferred from the Grand Princess were tested for the coronavirus.

The tests were negative and the ship was allowed to dock late last night.

On the west coast, another Princess vessel, Royal Princess, was also being held offshore – without passengers – after the CDC issued a ‘no-sail’ order, as one crew member on the ship had previously been on Grand Princess. Test results for that crew member are awaited.

Meanwhile, Princess confirmed last night that the disembarkation of guests onboard Grand Princess is expected to begin sometime today in the Port of Oakland.

Princess said that following health screenings, Grand Princess guests who are California residents will go to a federally operated facility within California for testing and isolation, while non-Californians will be transported by the federal government to facilities in other states. Crew will be quarantined and treated aboard the ship.

There are 235 Canadians aboard Grand Princess and the Canadian government has announced that it has hired a plane to collect them and deliver them into quarantine at a military facility in Trenton, ON. It’s the same place Diamond Princess pax have been serving out a quarantine period.