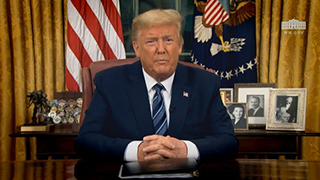 The cruise industry wasn't discussed per se during President Trump's speech last night, Cruise Week reports, but anyone hoping for specifics about an industry bailout was instead hit with shocking news regarding European travel.


Here's the key passage: Stating that new clusters in the United States had been seeded by travellers from Europe, President Trump said, "To keep new cases from entering our shores, we will be suspending all travel from Europe to the United States for the next thirty days. The new rules will go into effect Friday at midnight. These restrictions will be adjusted subject to conditions on the ground."The U.K. is exempt, and "there will be exemptions for Americans that have undergone appropriate screenings."Not surprisingly, immediate reaction from key trade members is that this is a further blow to the travel business' already weakened financials. "The purge begins," said a leader on the retail side regarding travel agents. "For our business, this is worse than 9/11," added a veteran agent."OMG -- this is so sudden," said a leader from the cruise lines to Cruise Week, adding: "Staying closer to home is the right move - we must get control of the Coronavirus before it gets out of control [in our own country]."  Of course it's way more than an industry issue. Outside of the industry, from the findings of actor Tom Hanks being tested positive for coronavirus to that of a Utah Jazz basketball player being tested positive, leading the NBA season to be suspended, there are plenty of indications today that while the official coronavirus numbers that President Trump cited as being low in North America compared to Europe, one factor could well be because so few people in comparison have been tested, not just those on cruise ships.