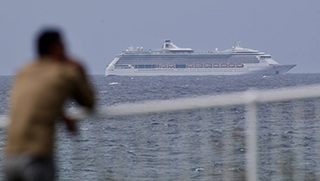 Numerous cruise ships travelling near Australia are finding themselves with no place to go, given the sudden decision of Australia's government to ban cruise ships for 30 days. Cruise Week reports that many North American cruise pax aboard those ships are particularly anxious for an outcome to be defined.

As cruise tracker Othell Owensby reports, among the packed, stranded vessels in or around Sydney and other points around Australia are two Royal Caribbean ships (Voyager and Spectrum), two Carnival ships (Spirit, Splendor), Cunard's Queen Elizabeth, Silver Whisper, Seabourn Sojourn, Sea Princess, and others (although most of the others, such as Costa Deliziosa, have few ties to the North American market).

On the bright side, Queen Mary 2 departed Australia before the ban went into effect, and is now heading to Pt. Louis, Mauritius as scheduled, a continuation of its 99-day world voyage.

None of the ships report any cases of COVID-19, but they are not being allowed to unload. As ship tracker Owensby puts it, the havoc Down Under exemplifies how with ship itineraries of late, just when you think it can't get worse, it gets worse.