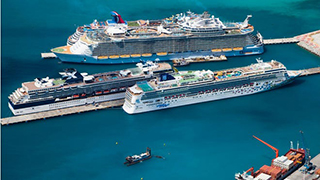 Cruise stocks were pummelled once again on Wednesday, Cruise Week reports. At 1 pm EST, Carnival Corp. was down 35%, trading around $8 a share. RCL was down 27% to $20 per share and NCLH down 27% to less than $8 per share.

Norwegian Cruise Line announced yesterday that effective 30MAR, it will temporarily reduce pay by 20% and move to a four-day work week.

“We are also working to temporarily discontinue the employer 401(k) match benefit. This plan is for our U.S. shoreside team members only and anticipated to be in place through 22JUN. No decisions have been made with respect to international teams. As a people-first organization, this decision was not taken lightly.”

Meanwhile, the U.S. Treasury proposed US$150 billion in relief for the travel industries yesterday. But there were few details.

President Trump was asked, "Those proposals don't detail which industries are going to get how much. Aside from the airlines, what about the cruise industries, and hotels? How much money do you see them getting?"

"We're talking about all of it," replied President Trump. "We haven't detailed it yet. We have detailed it to senators and to members of the house. We have been talking about it, and we're coming up with numbers. We haven't gotten there yet. But certainly the hotel industry, the cruise ship industry,  the airlines, those are all prime candidates, absolutely."