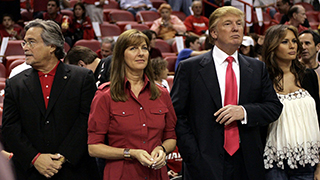 After praising the cruise industry in recent weeks and promising financial relief, U.S. President Donald Trump has been sending mixed messages of late. Now he appears to be suggesting that if cruise lines want financial relief, they will need to repatriate their operations to the U.S.

As Cruise Week reports, during a press conference yesterday, a reporter raised the issue of offshore incorporation for the major cruise companies.

“Senator Hawley [R-Mo] has said they should move back to the U.S. before they get a cheque,” the reporter told Trump. “Do you agree? Should they pay U.S. taxes before they get U.S. taxpayer relief?”

Trump’s response: “I'm a big fan of Senator Hawley, and I also like the idea. There were some senators that didn't want to do anything...like Carnival's a great company, but they're based in different places, I could tell you exactly where they're based, but I won't do that. But they are based in actually more than one place. As you know, ships are registered in different locations. I do like the concept of perhaps coming into the United States and registering here. It's very tough to make a loan to a company when they're based in a different country.”

Despite that opinion, Trump says the industry is important.

“They have thousands and thousands of people that work there and maybe almost as importantly, that work on shore filling these ships with goods and products. I know Carnival, what a great job they do -- Micky Arison -- and I would think that we could stick with Senator Hawley and maybe really look at that very seriously. So we're going to work very hard on the cruise line business and we're going to try and work something out, but I like the concept.”